Written by
The Jim Henson Company (2017) 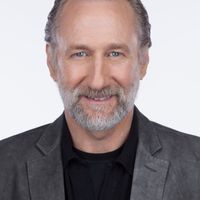 American director, producer, writer, and puppeteer. Brian Henson, son of Jane and Jim Henson, is Chairman of The Jim Henson Company, an award-winning television and film director, and a technological innovator.

Brian Henson began working with his father when he was 17, operating marionettes in the complicated bicycle scene in The Great Muppet Caper. In 1983, he joined the production of The Muppets Take Manhattan, assigned to Franz “Faz” Fazakas’s special effects team focusing on radio controlled puppets and other animatronic techniques. In 1984, Brian Henson moved to London to work on Return to Oz, assembling his own team of animatronic performers that worked with him on several projects there, including Jim Henson’s fantasy classic Labyrinth (performing the lead character Hoggle) and Jim Henson’s Storyteller (performing the lead character of the Storyteller’s Dog). Brian Henson began directing in 1988 on Jim Henson’s Mother Goose Stories, winning a Daytime Emmy Award in 1991.

Following the death of his father in 1990, Brian Henson became the CEO of The Jim Henson Company. In 2009, he became Chairman of the company.

In recent years, Brian Henson served as Executive Producer on the television projects Sid the Science Kid, Dinosaur Train, Jim Henson’s Creature Shop Challenge, No, You Shut Up!, Pajanimals, The Muppets’ Wizard of Oz, Farscape (the series), Farscape: The Peacekeeper Wars (which he also directed), It’s A Very Merry Muppet Christmas Movie, Bear in the Big Blue House, Muppets Tonight, and Jim Henson’s Jack and the Beanstalk: The Real Story (which he co-wrote and directed), among others. He also directed Battleground, an Emmy Award-winning episode of Nightmares & Dreamscapes: From the Stories of Stephen King, for TNT. Henson’s producing credits include Muppets from Space, Gulliver’s Travels, and Dinosaurs. Henson’s long list of film credits includes The Great Muppet Caper, Return to Oz, Labyrinth, The Witches, Little Shop of Horrors, and Teenage Mutant Ninja Turtles. Along with numerous television episodes, Brian Henson directed the feature films The Muppet Christmas Carol and Muppet Treasure Island and, in 2017, began production on The Happytime Murders.

Brian Henson has also led the creative and technological innovations of the company, overseeing the ongoing work in character-building, digital and physical visual effects at Jim Henson’s Creature Shop in Los Angeles and New York. He was part of the team that created and utilized the Henson Performance Control System, a powerful custom-built interface for puppeteers, which won an Academy of Motion Picture Arts and Science Scientific and Engineering Award in 1992. He has also been leading the Shop’s work with its revolutionary puppeteered animation system, the Henson Digital Puppetry Studio. In 2009, he and his team were awarded a Primetime Emmy Award, Academy of Television Arts and Sciences, Outstanding Achievement in Engineering Development for this proprietary system that allows performers to puppeteer digital characters in real time.

Beyond work for the screen, Brian Henson has developed live stage shows including Emmet Otter’s Jug-band Christmas at the Goodspeed Opera House and Puppet Up! – Uncensored, a live puppet improvisational comedy show which has toured around the US and to the UK and Australia.