The Union Internationale de la Marionnette (UNIMA) was founded in Prague, Czecholslovakia, in 1929. The organization is rich in history, friendships and achievements. Never, however, have any of the organization’s projects been so enthusiastically awaited nor demanded so much effort, dedication and financial resources as its world encyclopedia of puppetry arts (WEPA). And now it is freely available online in three languages! Whether one opens the Encyclopédie Mondiale des Arts de la Marionnette, the World Encyclopedia of Puppetry Arts or the Enciclopedia Mundial del Arte de la Marioneta, the reader has access to the broadest trove of information regarding puppetry, its history, practitioners, literature and influence ever available in one place. This great dream of UNIMA was initially conceived nearly forty years ago, and the course of its development is fascinating and worth retelling. 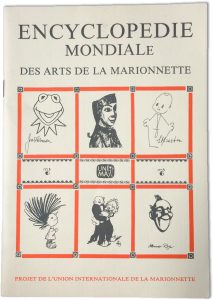 The idea of ​​a world encyclopedia of puppetry arts was born in 1978 within UNIMA’s Publication Commission. The impetus came from the Commission’s then president, Dezső Szilágyi, author, pedagogue and director of the Állami Bábszínház, the State Puppet Theatre of Budapest. It was he who assumed the preliminary work on the encyclopedia.

Then, in 1994, UNIMA’s General Secretary, Jacques Félix, entrusted the encyclopedia undertaking to Henryk Jurkowski, well-known historian, scholar, theatre critic and puppet theatre theoretician. As the encyclopedia’s editor-in-chief from 1994 to 2002, Professor Jurkowski developed the concept of what would eventually become a print version in French – the Encyclopédie Mondiale des Arts de la Marionnette.

In 1995, UNIMA published a leaflet publicizing the on-going project and, in 2000, with UNESCO’s financial assistance it produced an illustrated brochure that elaborated on the effort, setting the tone for the encyclopedia project as a whole. Henryk Jurkowski then surrounded himself with collaborators on several continents, including UNIMA members and specialists in the field. By 2001, the team had completed hundreds of articles, nearly a quarter of the manuscript. 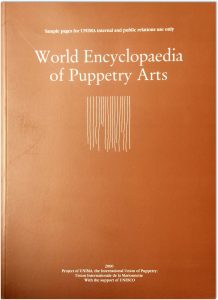 The illustrated brochure of 2005

Meanwhile, in June 2000, the XVIII UNIMA Congress held in Magdeburg identified the encyclopedia as a priority project, which would involve the responsibility of its successive leaders. These included its presidents and general secretaries, most notably Margareta Niculescu and Miguel Arreche who secured the project’s foundations and ensured its continuity.

Subsequently, Thieri Foulc, a publishing professional with previous exposure to puppetry publications, was named the encyclopedia’s editor-in-chief. He assembled an international team of researchers, historians and specialists in folk traditions, curators, artists and puppet professionals, as well as translators. The intercontinental network expanded, and new regional managers were recruited. The entire manuscript for the first version of the encyclopedia was completed in February 2006.

Intended for a discerning public interested in the subject and not only for specialists, the text constituted an encyclopedic, historical, cultural and technical description of world puppetry. It was the result of innovative research and informed observations of scholars and practitioners. In short, this huge collection of articles brought together an unprecedented amount of information. 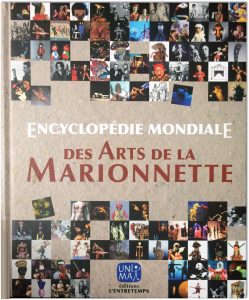 The first edition of 2009 in French

As proposed by Margareta Niculescu, the final editorial work was entrusted to the Éditions l’Entretemps directed by Christophe Bara. In June 2006, Massimo Schuster, the UNIMA President, and Miguel Arreche, its General Secretary, signed the partnership agreement with L’Entretemps. Over the previous thirty years, UNIMA had carried the effort with French Government funding and its own resources, but, in 2008, a grant from the Centre National du Livre in Paris, under the administrative supervision of the French Ministère de la Culture et de la Communication, made it possible to complete the encyclopedia.

In 2008, the XX UNIMA Congress in Perth elected Dadi Pudumjee the organization’s President and Jacques Trudeau, its General Secretary. They oversaw the completion of the encyclopedia’s first edition, and the hard copy Encyclopédie Mondiale des Arts de la Marionnette became available at the end of summer in 2009.

The official launch of the encyclopedia took place in Charleville-Mézières in France at the Foire du Livre (Book Fair) on September 25, 2009 during the Festival Mondial des Théâtres de Marionnettes.

In 2010, the task of preparing a second edition of the encyclopedia was entrusted to the new president of UNIMA’s Publication & Communication Commission, Karen Smith. It was expected that this new second edition would update and expand the number of articles in the encyclopedia, as well as appear in all three of UNIMA’s official languages – French, English and Spanish. Then, too, at its 2010 meeting in Dordrecht, the UNIMA Council decided that this revised, extended, and multi-language edition would be published online.

The task of preparing an online publication posed new challenges. As the editor-in-chief, Karen Smith assembled a team of puppetry and theatre scholars that included Penny Francis, John McCormick, Dr Kathy Foley, Dr John Bell, among many others, which jointly decided how to create this new online resource. Authors and area specialists involved in preparing articles for the initial French edition were contacted and asked for their input with regard to correcting errors and updating those articles in which they had expertise.

Compared to the early years of the encyclopedia’s genesis, the preparation of the second edition benefitted from the ease of access to international scholars now afforded by the Internet. One result is that the new edition of the encyclopedia is much more representative of world puppetry in general, with around two hundred new articles, many of which provide more visibility to Africa, Asia, Latin America and Pacific nations and these regions’ puppetry.

The team preparing the English version of the enyclopedia was led by the editor-in-chief and included twenty-five translators and editors from the United Kingdom, the United States, Canada and Australia, as well as many puppetry scholars, university professors and graduate students. The English team of editors was also charged with soliciting new articles from researchers in the field and for ensuring that these were scholarly additions to the publication. In addition to updating articles and adding new articles, bibliographies were updated and prepared for each article in the three language versions.

The team preparing the translations in Castilian Spanish were students of the Department of Translation and Hispanic Philology at the University of the Basque Country in Northern Spain, supervised by Nekane Ramírez de la Piscina Audicana, professor and professional translator and interpreter, who also served as the “linguistic editor” of the Spanish version. Dr Francisco Cornejo served as the Spanish version’s “scientific editor”.

Among others involved in the revised Spanish version were Adolfo Ayuso, Carles Cañellas, the authors, translators and editors who contributed to the original edition, and the late Miguel Arreche and Idoya Otegui for their tireless work on this long-term project!

The task of correcting and updating the French version as well as translating and inserting the two hundred new articles began in 2015. Coordinated by the editor-in-chief, the principal French translators included Edmond Debouny, Marthe Adam, Lucile Bodson, Jacques Trudeau and Julie Postel. Idoya Otegui must be thanked for her supporting role.

Images that could be used to illustrate the 1,262 articles comprising the second edition were initially solicited in 2014. However, only in 2016 was it possible to begin preparing captions in the three languages. This has proved to be an onerous task, and the work will continue as new images are received from the field.

Raphaèle Fleury provided the initial technical direction required to put the encyclopedia online and coordinated the solicitation of proposals from design companies. The final versions of the articles in all three languages, complete with their hyperlinks, were transmitted in 2016 and 2017 to the principal webmaster, Cédric de Mondenard. He then collaborated with the Spanish studio URLearning and its lead developer Miguel Moro, to design a complex but pliable architecture which will ensure the durability and broader long-term development of this online endeavour.

Finally, on September 22, 2017, in Charleville-Mézières, France, during the presidency of Dadi Pudumjee and general secretariatship of Idoya Otegui, the online trilingual encyclopedia of world puppetry arts was launched!

No document the size of the WEPA is ever perfect nor is it complete. Fortunately, the online WEPA is a living document and more amenable to correction and change than those in printed form. Over time, articles can be corrected and updated and new articles can be incorporated. To ensure the reliability of the WEPA’s contents, a “scholarly editorial” or “scientific” committee will be created to review and edit new contributions to the encyclopedia.

Again, UNIMA would like to express its deep appreciation to all of the people and institutions that have contributed to the preparation of the online WEPA. We are particularly grateful for the enduring support extended by four French government entities that believed in this undertaking – the Ministère de la Culture et de la Communication, the Région Grand-Est, the Département des Ardennes, and the city of Charleville-Mézières.