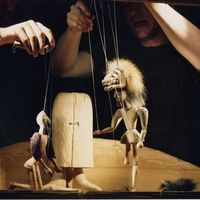 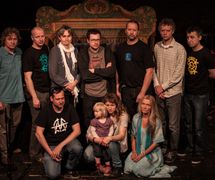 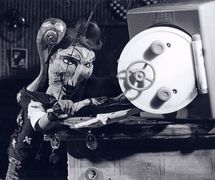 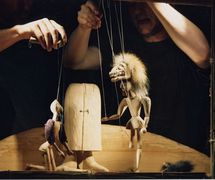 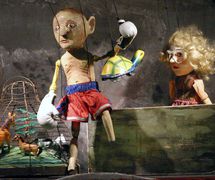 Czech independent puppet company founded in Cheb (West Bohemia) in 1991. The first production of Buchty a loutky (Cakes and Puppets), Císařovy nové šaty, an adaptation of “The Emperor’s New Clothes” by Hans Christian Andersen, was created in 1991 by several classmates from the Department of Puppetry of the Academy of Performing Arts (DAMU – Divadelní fakulta Akademie múzických umění) in Prague. The company received main award at the Skupova Plzeň (Skupova Pilsen Festival) with Tajemný cizinec (The Mysterious Stranger, 1992), a provocative performance accompanied by rock music. Their next show was for children, Jankovi noví dědečci (The New Grandparents of Janek, 1992), which was successful at the Mateřinka Festival in Liberec in 1993. During the following year, the company moved to Prague and performed on many stages as well as outdoors.

Since 2003, the Buchty a Loutky company is based at the Švandovo divadlo (Švandovo Theatre) where it performs regularly. The company caters to a wide range of audiences. Its repertoire for children includes many fairy tales and adaptations such as Tři malá prasátka (The Three Little Pigs, 1998), Žabák Valentýn (Valentine, the Frog, 1999), Opička Jenovéfa (Genevieve, the Monkey, 2000), and Čarodějnice (Witches, 2003). Many of the company’s productions for adults were critically acclaimed and continue to be presented at theatre festivals in the Czech Republic and abroad such as Příběh ??? člověka (The Story of ??? a Man, 1996), Urbild (1997), Gilgamesh (2001), and the company’s recent adaptation of The Count of Monte Cristo entitled Pomsta (Revenge, 2002), and Rocky IX (2004).

The company selects from major literary works and transforms them into performances; however, they usually change the main meaning of it by using metaphor, black humour, film sequences and provocative combination of puppets and live acting.

Since the founding of Buchty a Loutky, Marek Bečka, Vít Brukner, Radek Beran, and Zuzana Bruknerová are the heart of the company who also work with other artists from various disciplines. Today, Buchty a Loutky is renowned throughout Europe and has lost none of its provocative spirit.