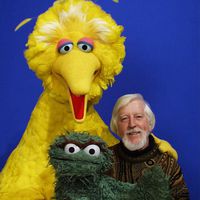 American puppeteer, animator and illustrator. Born Carroll Edwin Spinney on December 26, 1933 in Waltham, Massachusetts, Spinney began puppeteering as a child with puppets made by his mother. With his own creation, a cat puppet named Pickelpuss, Spinney worked his way through art school performing puppet shows at birthday parties. Subsequently, stationed in Las Vegas with the U.S. Air Force, he worked on his own [television] puppet show, Rascal Rabbit, and then, transferred to Germany, used his artistic talents to write and illustrate Harvey, a comic strip about military life.

In 1960, Caroll Spinney appeared on Boston airwaves, puppeteering Goggle on The Judy and Goggle Show with Judy Valentine. He also wrote and animated a series of cartoon shorts called Crazy Crayon. Throughout the 1960s, Spinney performed various characters, including his cat Picklepuss, on the Boston television show Bozo’s Big Top. He also performed the walkaround character Mr. Lion who, channeling Spinney’s cartooning abilities, created pictures out of the letters in children’s names.

Caroll Spinney met Jim Henson in the early 1960s, but it wasn’t until 1969 that they began to work together. After watching Spinney’s performance at a [Puppeteers of America] festival in Salt Lake City, Utah, that summer, Henson recruited Spinney to perform on Sesame Street. The show premiered November 10, 1969 and featured Spinney’s performances of Big Bird and Oscar the Grouch. Though most identified with those two characters, Spinney also performed Bruno the Trash Man, Granny Bird and an array of Anything Muppets. Shot in 1984, the first Sesame Street feature film, Follow That Bird, starred Spinney as Big Bird. As of 2017, he is still providing the voices for Big Bird and Oscar.

As Big Bird, Caroll Spinney has traveled the world. For several years, starting with a Boston Pops television special in 1971, Big Bird conducted orchestras (and sometimes Oscar the Grouch sang with them) from Australia to Buffalo, New York. Sesame Street TV specials Big Bird in China and Big Bird in Japan introduced Spinney’s work to Asia. Numerous trips to the White House in Washington, DC illustrate the widespread appreciation for the characters that Spinney has brought to life, and Big Bird’s Star on the Hollywood Walk of Fame (1994) recognizes his role as a popular culture celebrity.

Caroll Spinney has been honored for his work on Sesame Street and related projects with four Daytime Emmy Awards, two Grammy Awards, and a special Lifetime Achievement Award in 2006 from the National Academy of Television Arts and Sciences. In 2000, Spinney was named a Living Legend by the United States Library of Congress. His life and work was the subject of a feature-length documentary, I Am Big Bird: The Caroll Spinney Story, produced by Copper Pot Pictures and released in 2014.

For almost half a century, Caroll Spinney’s performances on Sesame Street have educated and entertained. As a stand-in for the child viewer, Big Bird (and Spinney) have helped his audiences face serious situations and disappointments with a sensitive and safe approach. The joy inherent in Caroll Spinney’s life as a puppeteer shines through his characters, infecting his young viewers with laughter and love.