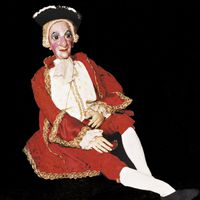 Character from the Italian puppet theatre. Cassandrino was created by the Roman Filippo Teoli in the first half of the 19th century derived from an older “mask” (maschera, stock character), Cassandro.

Cassandrino found great success in Rome at the papal court because he imitated the manners and behaviours of the ruling class, making them the object of mockery and satirical allusions. Of a certain age but with a still-youthful allure, well dressed, well powdered, Cassandrino knew how to adapt to any situation in the course of his numerous adventures. Cassandrino dilettante e impresario (Cassandrino the Amateur Impresario) satirized the world of lyric opera and the works of Rossini. Cassandrino allievo di pittura (Cassandrino the Painting Student), Cassandrino marito (Cassandrino the Husband), Il viaggio a Civitavecchia (The Journey to Civitavecchia): these are a few of the titles of comedies written and performed by Teoli, who identified with his character so much that he was called Signor Cassandro. He also had great success among foreign visitors to Rome in this period; they mention him with admiration in their writings.