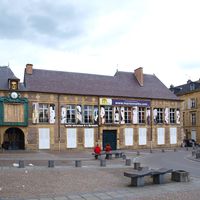 School created in 1987 in Charleville-Mézières (Ardennes, France). The École Nationale Supérieure des Arts de la Marionnette, under the auspices of the Ministry of Culture, is the first and only school in France to professionally train actor-puppeteers. A national diploma in puppetry arts (DNSP) is awarded after the successful completion of a three-year course of study equivalent to a degree in theatre studies. As part of its international outlook, the school accepts French and foreign students. Created by Margareta Niculescu, the school has benefitted from an innovative pedagogy since its inception. It emphasizes interaction between students and master-creators as well as an artistic vision and multidisciplinary approach associating playwrights, visual artists, stage designers, theatre and new stage artists… combining puppet theatre with other arts.

The entrance examination, initially held every three years, has since 2016 taken place every two years, the school’s new facilities enabling it to double the number of students. After a first selection based on the prospective student’s dossier, a series of auditions followed by a trial period allow the selection of candidates, aged from 18 to 26 years. A direct entry into the second year of the programme is possible provided the candidate has already completed a course of training in another establishment of higher learning. Fundamental training is taught during the three years of study including instruction in acting, manipulation practice, voice, body and movement training, plastic arts, musical instrument instruction, theatre and performance history, as well as foreign languages. During the course of study, workshops are lead by practitioner artists bringing the students in contact with unique training practices and artistic visions. Students learn playwriting and dramaturgy through a collective process under the guidance of guest directors, and are also encouraged to develop their own personal projects.

The school benefits from its unique position as part of the Institut International de la Marionnette (IIM, International Institute of Puppetry), a research and training organization with a resource centre, specialized book and video libraries, and a fully equipped theatre, all of which are available to the students.

Since 2014, under the direction of Eloi Recoing, the School pays special attention to following and monitoring the progress of its graduates, promoting their networking with the professional community through specific activities supported by the Region.

Today, ESNAM is acknowledged as a permanent research centre for contemporary playwriting and is among the schools of higher learning in theatre arts recognized for the quality of its education.