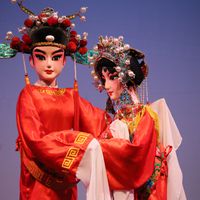 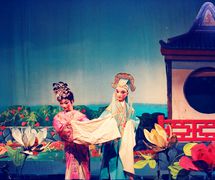 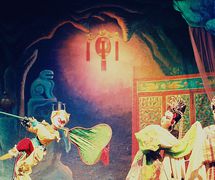 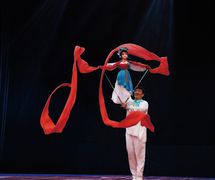 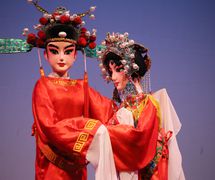 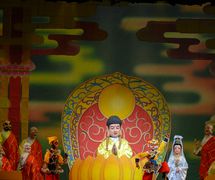 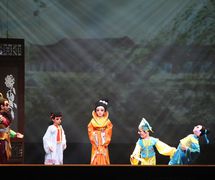 Chinese puppet troupe based in Guangzhou, Guangdong Province. Founded in 1956, the Guangdong Puppetry Art Troupe (formerly Guangdong Puppet Troupe) in south-east China serves a primarily Cantonese audience. Having a repertoire of more than 300 puppet plays, both traditional and modern, and pantomime with actors and puppets, the troupe performs approximately 300 shows a year in its own theatre and venues such as factories, schools, army camps, and rural areas. It produced the film, Lotus Fairies, the first Chinese puppetry film in colour, in 1957 in conjunction with the Great Wall Studio in Hong Kong.

The company has received many international and national awards. The Monkey King Thrice Borrows the Palm-leaf Fan was awarded the Silver Medal at the Second International Puppet Show Festival in Romania in 1960. Highlights of Chinese Lingnan Area Puppetry received the best art special award at the Second International Puppetry Festival in Prague. Nezha Conquers the Dragon King won the prize for best play at the Chinese National Puppet Festival in 1981. The company achieved an award from the Guangdong Municipal Government for quality artwork in 1997, and performed at the Asian Arts Festival in New Zealand in 1999. Other awards include the Wenhua Special Award at the 2010 Ninth Chinese National Arts Festival for Eight and Half Floors, which featured both puppets and human actors. The company has toured over twenty countries, including Romania, the Soviet Union, Spain, Australia, Great Britain, France, the United States, and Germany, and performs frequently in Hong Kong and Macau.

The unique Lingnan area carving style results in distinctive characters and the company is noted for their puppets which have been given as gifts in Japan, Russia, France, the United States, Germany, the Czech Republic, Hungary, to UNIMA national centres and international puppet museums, and to the Royal Family of Cambodia. At the 21st UNIMA Congress and World Puppetry Festival held in Chengdu in 2012, the company performed The Real and False Monkey King, which had won the best play award at the Shanghai First International Puppet Festival.

The troupe serves children and youth audiences and preserves the puppetry of Lingnan. Noted troupe members include the performers, Li Yuchao, Cui Keqin; the playwright, Cen Yuanzhen; and the art designer, He Weichao. Guangdong Puppetry Art Troupe was one of the twelve founding troupes of UNIMA China in 2002.