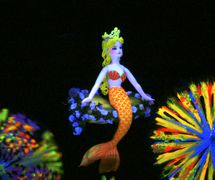 Chinese puppet troupe located in Guangxi Zhuangzu Zizhiqu (Autonomous Region of Guangxi Province). Founded in April 1956, this troupe is a municipal government company that performs for child audiences under the auspices of the Department of Culture of Guangxi Province, an area north of Vietnam.

The troupe preserves and develops traditional rod puppetry, which has a long history in the region. The company is known for its lifelike and beautiful figures and the use of black light techniques in some of its shows. Its creations include a large-scale production of the myth, Honghai’er (The Red Boy), the human-puppet fusion dance, New Rhythm of Puppet Art, and the puppet ballet The Little Mermaid (based on the Hans Christian Andersen tale which the company presented at the 21st UNIMA Congress and World Puppetry Festival held in Chengdu in 2012). It has also developed works based on traditional tales such as The Story of the White Snake, Sanjie Descends from Heaven, and Monkey King Wreaks Havoc in Heaven.

The company has toured throughout China and internationally. Its works have won the best production award in the China National Shadow Play and Puppetry Showcase, and the best artistic creation award in the 2002 Sixth World Festival of Puppetry in Prague. In 2010, the troupe took part in the Second International Marionette Festival in Vietnam. It has also appeared in Japan, Singapore, and India to acclaim.