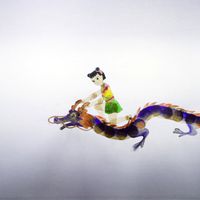 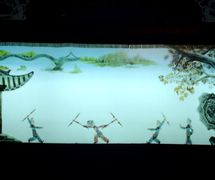 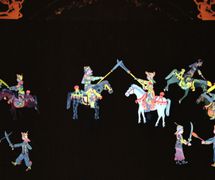 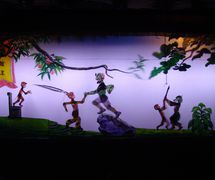 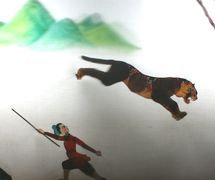 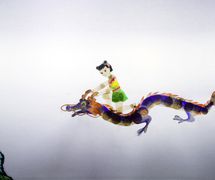 Harbin shadow puppetry has a recorded history of at least 200 years. It has its own unique, easily recognizable musical style, typical of Longjiang, characterized by its “warbling” sound and elegance, with its accompaniment of several string instruments of the region. Longjiang shadow puppetry is also distinguished by the figure’s face and by the fact that female figures wear shoes in contrast to the small triangular “bound feet” of most other areas. Popular until the 1980s, Longjiang shadow puppetry continues to develop in recent years through reforms and innovations. It creates shows with modern themes based on tradition.

The troupe uses new technology to make the figures and props, has improved methods of manipulation, and has also created special lighting effects, experimenting with cloud lights, rain lights, strobe lights, projections, and revolving lights. Shadow theatre has been listed among Chinese National Intangible Cultural Heritage assets for safeguarding since 2006. Company member, Yu Juiwen has taught shadow figure carving at Harbin Normal University since 2005 in an effort to popularize the art. The group presented the well-known interlude Wu Song Fights the Tiger, a story from The Water Margin, at the 21st UNIMA Congress and World Puppetry Festival held in Chengdu in 2012.

Gao Shufang is a fourth generation inheritor of the shadow theatre, a member of the Harbin Children’s Shadow Puppet Troupe, a National Class-A performer, director of the group, and a leading national expert on the shadow theatre. She went to Germany to work on classifying and identifying more than 3,000 shadow puppets in different collections. The troupe has performed for Chinese political leaders at the Huairen Hall of Zhongnanhai (Chinese Communist Party headquarters in Beijing).

The Harbin Children’s Shadow Puppet Troupe has toured Europe and Asia for cultural missions and has won awards at the national, provincial and local levels.