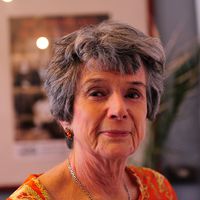 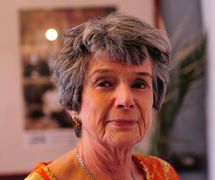 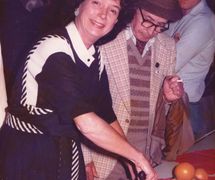 British writer, editor, lecturer, activist and advocate for puppetry. Trained as an actress, Penny Francis discovered puppets through her husband, actor Derek Francis, with whom she staged four (amateur) string puppet (marionette) shows in a 30-seat theatre built in the garden of their Barnes, London home in 1961. Penny Francis volunteered her services to the puppet organizations in 1970 to assist in the establishment of a national centre; she discovered a talent for advocacy and went on to be one of the founders of the Puppet Centre Trust in 1974, a high-profile and effective organization dedicated to the promotion and practice of puppetry in all its forms. She was Puppet Centre’s fundraiser (attracting subsidy from a number of sources), first salaried administrator and later honorary general secretary. She organized two international festivals in theatres throughout London in 1979 and 1984; edited the Centre’s magazine Animations from 1976 to 1992, and travelled widely to research and report on contemporary developments of the art form, communicating through Animations and in other national and international publications.

Penny Francis is a UNIMA Member of Honour (2012), and former councillor (1992 -2008) and Executive Committee member (1996-2004) of UNIMA with a mission to promote new British work abroad. She has been the collaborating editor of works by Henryk Jurkowski: Aspects of Puppet Theatre (1988) and A History of European Puppetry volumes I and II  (1996 and 1998), and editor of UNIMA publications such as The Newsletter of UNIMA (1996-2004), The Rise of the Puppeteer for British UNIMA (1997), and The Worldwide Art of Puppetry (2000). She has published many essays and research studies in Animations (since 1976) and in Animations Online (since 2002). In December 2011 her book on the practice of puppetry in contemporary theatre, Puppetry: A Reader in Theatre Practice (Palgrave Macmillan), was published.

In 1992, Penny Francis was appointed Puppetry Tutor at London’s Central School of Speech and Drama, where she co-designed the puppetry programmes at BA and MA level, the first of their kind in Britain. In 1998, she was awarded the MBE for “services to puppetry” and, in 2008, became an Honorary Fellow of the Central School of Speech and Drama, University of London. Now in semi-retirement she continues to write, lecture and travel, and remains on the Board of the Puppet Centre Trust and a consultant to the Central School.