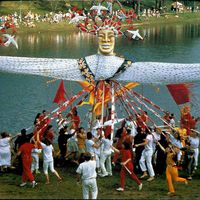 In the Heart of the Beast Puppet and Mask Theatre[HOBT]

American puppet company using giant puppets, in Minneapolis, Minnesota. In the Heart of the Beast Puppet and Mask Theatre (also known as Heart of the Beast or HOBT) was founded in 1973 by Sandy Spieler (b.1953) and was incorporated as a non-profit organization (NGO) in 1974. Initially named Powderhorn Puppet Theater (named after the south Minneapolis neighbourhood where it has always been located), the name of the company was changed in February 1979.

Initially inspired by Bread and Puppet Theater, HOBT has established a unique creative profile. In the summer of 1988, the company moved into the Avalon Theatre in Minneapolis, a former cinema that HOBT purchased in 1990. The company has written and performed more than 70 distinct original plays. Some shows are remounted on a semi-regular basis, while others have had a single run.

The company is best known for their annual MayDay Parade and Festival (started 1975) that is seen by as many as 35,000 people each year. The parades are community events. The director, Sandy Spieler, states, “As we share this act of building and performing, we find that theatre brings people together. It builds community.”

In the Heart of the Beast Puppet and Mask Theatre has performed in Canada, Denmark, Sweden, England, South Korea, Dominican Republic, Haiti, and throughout the United States. The company’s theatre work, Befriended by the Enemy (1994), was awarded a UNIMA-USA Citation of Excellence and another citation in 2007 for We the People, WAKE! HOBT’s theatre regularly presents the work of other puppet companies. To celebrate HOBT’s 25th anniversary, The Weisman Art Museum presented a retrospective exhibit, Theatre of Wonder: 25 Years in the Heart of the Beast.