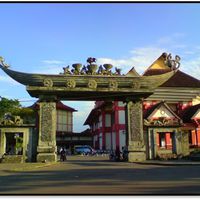 ISI Surakarta[Indonesian Institute of the Arts of Surakarta]

Indonesian university of performing arts founded in 1965 in Surakarta (Solo), Central Java, Indonesia. It developed from the royal department of performing arts of the kingdom of Surakarta under the direction of Prince Soerio Hamidjojo. In 1950, it became a high school of music (Conservatory of Music); by 1964 it added a tertiary institution ASKI (Akademi Seni Karawitan Indonesia, Indonesian Academy of Music); by 1983 it was renamed STSI (Sekolah Tinggi Seni Indonesia, Indonesian College of the Arts), and in 2006 it took its present name.

ISI Surakarta offers programmes in puppetry (padalangan), music (karawitan), visual arts (seni) and dance (tari). Attracting the offspring of traditional puppeteers (dalang) from all over Java as well as students from outside the tradition, ISI is a centre of innovation creating forms like the tightly scripted wayang padhat (condensed wayang) as well as training students in traditional Surakarta style wayang kulit purwa shadow theatre puppetry and more specialized types of wayang. Due, in part, to the university’s influence, the Surakarta style has become the norm throughout the Javanese speaking areas of Indonesia while local variations have waned. Students document local traditions in theses, so the ISI library is an important repository for research on Indonesian puppetry. Graduates of the programme hope to be professional dalang, but only a limited number succeed. Others become teachers or cultural officials.

Important teachers include Ki Purbo Asmoro, a noted international dalang as well as an ISI teacher. Significant alumni include Dalang Sumarsam who teaches at Wesleyan University in Connecticut (USA) and performs wayang in the United States, Dalang Joko Susilo who teaches at the Univerity of Otago in New Zealand.