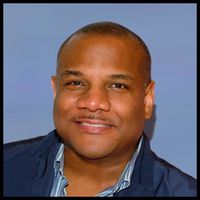 American puppeteer, director and producer. Born in Baltimore, Maryland, on September 17, 1960 and raised in nearby Turner Station, Kevin Clash began making puppets as a child, performing shows for his neighbors. He built dozens of puppets and by the time he was in high school, he was performing around the region at schools, churches and community events. Discovered by television personality Stu Kerr, Clash began building and performing on local television on children’s programs such as Caboose and Mister Rainbow’s World. Around the same time, he created a puppet called Doc for the syndicated children’s program Romper Room that originated in Baltimore. With his mother’s help, Clash built 30 additional puppets for the program. In the early 1980s, he performed and built puppets on Bob Keeshan’s Captain Kangaroo and the successor show Wake Up with the Captain. From 1981 to 1986, Clash performed and was puppet coordinator on The Great Space Coaster.

During a high school trip to New York in the late 1970s, Kevin Clash met costume designer and puppet builder Kermit Love who introduced him to Jim Henson. Clash began work on Sesame Street in 1984 (through 2012), performing numerous characters including Hoots the Owl. Within a couple of years, he became the sole performer of Elmo, launching the character’s ascent into superstardom. Other Sesame Street projects featuring Clash’s directing, producing and performances include countless home videos, television specials and the feature films Follow That Bird and The Adventures of Elmo in Grouchland.

Kevin Clash performed in other Jim Henson productions, notably as Clifford on The Jim Henson Hour in 1989 and Muppets Tonight in 1996-1997 (and other Muppet specials, home videos and an appearance on The Arsenio Hall Show), as Eliot Shag in the series Dog City in 1992 and as Baby Sinclair on the series Dinosaurs in 1992-1995. Clash’s additional feature film performances include Labyrinth, Teenage Mutant Ninja Turtles, Teenage Mutant Ninja Turtles II: The Secret of the Ooze, Muppet Treasure Island and Muppets from Space. Non-Henson or Sesame Workshop productions include Big Bag (1996-1998), Math Bites (2014), and guest puppeteering on various series.

Kevin Clash has directed numerous Sesame Street episodes and home videos including Abby in Wonderland, produced or executive produced an array of projects including the feature film The Adventure of Elmo in Grouchland, and has served as puppet captain or coordinator on various projects. He was honored by the National Association for the Advancement of Colored People in 1988 and nominated five times for an Emmy Award for Outstanding Performer in a Children’s Series for his work on Sesame Street, winning in 1989-1990. His work as Co-Executive Producer on Sesame Street was recognized with an Emmy Award for Outstanding Pre-School Children’s Series in 2000-2001. A gifted puppeteer and talented director and producer, Kevin Clash continues to work in the entertainment industry, leading teams of performers and sharing his insight and experience.