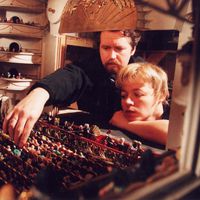 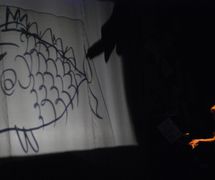 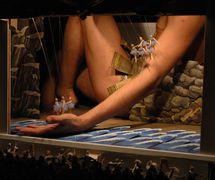 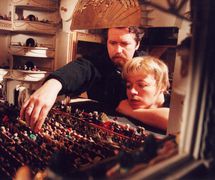 Russian puppet theatre company. Established in Moscow in 1988 by Ilya Epelbaum (designer, b.1961) and his wife Maya Krasnopolskaya (puppet theatre actress, b.1962), Moskovsky teatr TENb (literally, Moscow Shadow Theatre) was the first Russian private family theatre to take shape under Mikhail Gorbachev’s new perestroika law regarding cooperative businesses. Since 1991, it has held a municipal status, transitioning from a private organization to one that is financed by the local government.

The name of the company, TENb, meaning “shadow”, is something of a misnomer – the company is not limited to any particular puppet type or genre. Volshebnaya dudochka (The Magic Pipe, 1988), Parus (The Sail, 1992), and Metamorphozy (Metamorphoses, 1995) all employ optical effects. Schelkunchik (The Nutcracker, 1992) featured sets made of sweets which the audience ate while the eponymous protagonist cracked real nuts for the audience. Krasniye shapochki (Little Red Riding Hoods, 1996) utilized a summer camp setting to generate materials used in producing a collective creation. Gamlet (Hamlet, 2002) was a variety show, having nothing whatever to do with Shakespeare. Thus, all the theatre’s productions were “happenings” of sorts in which theatricality outweigh narrative and dramatic development.

The company has also conceived a number of stage “mystifications” or spoofs. These include Lebedinoye ozero. Opera (Swan Lake. An Opera, 1999), “reportedly” based upon the recently discovered texts of the operatic arias that were originally intended by Pyotr Tchaikovsky instead of the ballet he actually composed. The most significant of these spoofs was Gastroli Bolshogo Korolevskogo Lilikanskogo teatra v Rossii (The Tour of the Lilikan Grand Royal Theatre in Russia, 1996), which included a “tour” of the theatre’s building, museum, and even its own travelling audience of “Lilikans” (Lilikans, inhabitants of the legendary kingdom of Lilikania) – all “spied upon through the windows” by just five human viewers at a time.

The show generated another theatrical spoof, Lilikansky muzei teatralnykh idei (The Lilikan Museum of Theatre Ideas, 1999). For this production, leading cultural personalities, such as screenwriters and theatre directors, were asked to describe their “ideal” theatre production, one that would be impossible to mount on a real stage, be it for actors or puppets. Their ideas were then realized as half a dozen, 15-minute, mini-productions performed on the scale of a tiny theatrical space constructed by Ilya Epelbaum. For example, drama director and educator Anatoly Vassiliev for his mini-production invented a version of Molière’s The Misanthrope titled Mizantrop (2000) in which the main character, Alceste, first breaks and then burns down the sets; the show ends with the death of a heckling spectator and the total destruction of the theatre in a fire. In Dozhd’ posle potopa (Rain After the Deluge, 2001), a tale about the destruction of civilization by legendary Italian screenwriter Tonino Guerra, cities constructed of matchsticks, in turn, are wiped out by a huge swell of water.

Moskovsky Teatr TENb has participated in more than thirty international festivals and, in 1994, founded its own Family Theatre Festival in Moscow. It has won the largest number of Golden Mask Awards (Russia’s top theatrical awards presented at the Golden Mask national theatre festival) in the category “Innovation”.