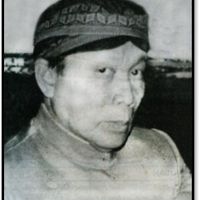 Indonesian puppet master (dalang) of Javanese wayang kulit (shadow theatre). Though his full name was H. Panut Sosrodarmoko, he was known as Ki Panut Darmoko (Ki is an epithet of respect accorded to a senior dalang). He studied from his dalang father and first performed at age sixteen. By 1948, he was frequently hired, and continued to be from the 1960s-1990s. He also worked as a teacher at Sekolah Pendidikan Guru Negeri (National Teachers School) in Nagnjuk. He contributed to courses at the high school of performing arts in Surakarta (Konservatori Karawitan Indonesia, Conservatory of Music), Himpunan Budaya Surakarta (Surakarta Cultural Group), and the Dalang Programme of Pamardi Putra. He was invited to perform at the presidential palace in Bogor during the rule of President Sukarno (1966) and at the presidential palace for Suharto (1973, 1975, and 1978).

Ki Panut Darmoko was noted for his ruwatan (exorcism) performances, and on January 17, 1998 he performed a ruwatan for the monarch Sunan Pakabuwono XII and his Surakarta palace. The performance was meant to free the royal family and the whole nation from negative influences in the wake of the 1997 economic collapse during which Surakarta had experienced riots and fires and following which national protests were building toward the ouster of the Suharto (Soeharto) government.