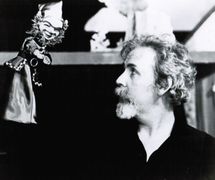 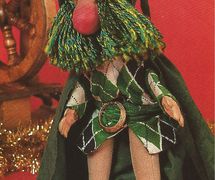 American puppeteer. The professional career of Paul Vincent Davis began in 1965 in Washington, DC. He worked with Carol Fijan doing Shakespeare with puppets. He moved to the Boston area in 1978 to become the Artistic Director of the Puppet Showplace Theatre. Working with his partner, Mary Churchill, who founded the Puppet Showplace Theatre in 1974, they nurtured a company and a permanent theatre that became the home of puppetry in Boston. Davis works mostly with hand puppets (glove puppets) for audiences of children and families.

Davis has appeared at many puppetry festivals and is well known for presenting excellent workshops. The design, movement, voices and scripts of his shows are models of clarity. Productions that have earned UNIMA-USA Citations of Excellence are: The Leprechaun of Donegal (1980), The Golden Axe (1982), Three Festival Dances (1982), Beauty and the Beast (1984), Fables of Ancient Rome (1988).

The work of Paul Vincent Davis has been recognized with the Puppeteers of America President’s Award in 1989. In 1985, he was the subject of a book by Kathryn Lasky, simply titled, Puppeteer.