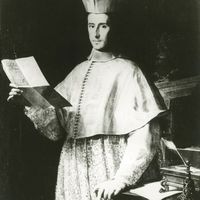 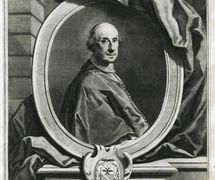 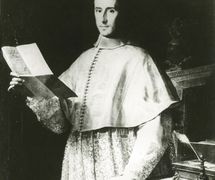 Italian cardinal (1698) and writer, founder of a theatre and puppetry amateur. Grand-nephew of Pope Alexander VIII and pontifical vice-chancellor, Pietro Ottoboni was the generous patron of numerous artists and musicians. The theatre that he had built in the interior of the Palazzo della Cancelleria (Chancellery) in Rome was inaugurated in 1690 with La Statira, which he wrote himself and which Alessandro Scarlatti had set to music. He was the author of Amore e gratitudine (Love and Gratitude) set to a score by Flavio Carlo Lanciani, and of Un Martirio di Sant’ Eustachio (The Martyrdom of Saint Eustace) that he signed with the pseudonym Crateo Pradelini, an anagram of “cardinale Pietro”.

Arcangelo Corelli was hired as music director in this theatre, which, from 1694 onward, after various modifications was called Teatro Novo dei Burattini and in which continued to be staged comedies with popazzi, or idylls “marvellously performed by figurines”. In 1709-1710, the architect Filippo Juvarra worked at the renovation of the theatre in which three levels of boxes were created. After this, puppet plays were no longer performed in this theatre, but only plays for actors. The theatre closed after the death of Cardinal Ottoboni. The French travellers Jean-Baptiste Du Bos and Charles de Brosses were witnesses to the richness and rare quality of the productions staged there.