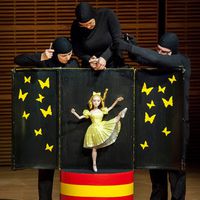 Austrian theatre established in 1913 by Anton Aicher (1859-1930), artist and sculptor. Nicknamed the “Puppets of Mozart”, the Salzburger Marionettentheater were famous for their performances of Mozart’s operas, of which the first was Bastien und Bastienne (Bastien and Bastienne), performed in 1913 (see Opera). In the beginning, however, the theatre also performed the works of Count Franz von Pocci and other popular texts written by the “house poet”, Hans Seebach. It is by working in close association with Josef Leonhard Schmid that Anton Aicher learned all that was necessary for the creation of a marionette theatre.

Hermann Aicher (1902-1977) and his wife, Friedl (1904-1993), took over the theatre from his father in 1927. Hermann had studied at the Technical University and at the School of Fine Arts in Vienna. After the death of Anton Aicher in 1930, the theatre saw several changes particularly in terms of tours abroad that took it across the world, through Europe to Russia, the United States and Asia and beyond. At the beginning of the 1950s, the designer Gunther Schneider-Siemssen completely modernized the theatre’s performance techniques adding the revolving stage, holographs, etc.

The Salzburger Marionettentheater has, since 1971, been located in one of the halls of the Baroque Theatre next door to the Mozarteum in Salzburg. After the death of her father in 1977, it was Gretl Aicher (b.1928) who took over the reins of the theatre.

The Theatre has always been well known for the swanlike, graceful, timeless quality of its puppets and its repertoire includes operas by Mozart: Die Zauberflöte (The Magic Flute, 1952 and 1954), Die Entführung aus dem Serail (The Abduction from the Seraglio, 1958), Cosi fan Tutte (1988); operas by Rossini: Il Barbiere di Sviglia (The Barber of Seville, 1971); and Offenbach: Hoffmanns Erzählungen (The Tales of Hoffman, 1985); a play by Shakespeare: Der Sommernachtstraum (A Midsummer Night’s Dream, 2001); and a fairy tale to music by Engelbert Humperdinck: Hänsel und Gretel (Hansel and Gretel, 2003).