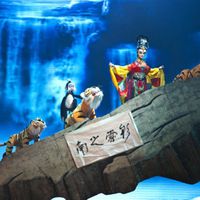 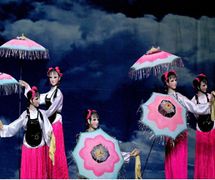 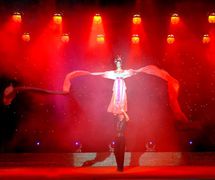 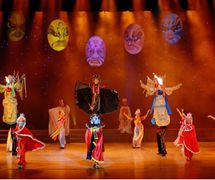 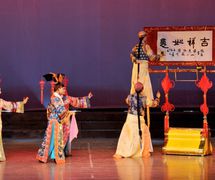 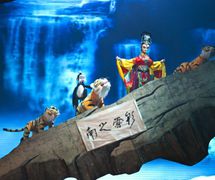 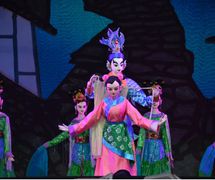 Chinese puppet theatre company based in Nanchong, Sichuan Province. This company is the sole inheritor of the giant puppets of northern Sichuan that feature life-size rod puppets. This rare theatre form has been listed by the National Intangible Cultural Heritage Project for safeguarding.

The form has a history of over 300 years and was transmitted through individual families. By early Qing Dynasty (1348-1644), the genre was popular in the region of Ma’anchang, Yilong County, Sichuan in southwestern China.

This rod puppetry was refined over the years and features such coordinated performance of the puppet manipulators and their giant puppets that the movements of the two are almost indistinguishable. These puppets can change clothes, dance with swirling long scarves, drink, smoke, and light candles. Subtle and intricate movements can also be created such as the change of facial expressions, the kowtowing of characters, the playing of musical instruments, and fighting with swords. Puppets are especially suited for performing incredible stunts, as are found in myths and legends. These intricately modelled and finely costumed, life-size figures are so realistic in their movements and actions that the effect is quite magical.

Since 1987, the Chinese Ministry of Culture has sent the troupe to places such as Russia, Finland, Singapore, Thailand, the United States, Great Britain, Chile, the Philippines, Korea, Malaysia, and Mexico to enthusiastic acclaim. The troupe received the Best Performance award from the Chuncheon International Puppet Festival in South Korea in 2003. At the Beijing Olympics in 2008, the troupe performed The Little Girl with the Terracotta Warriors and Horses.

The troupe includes puppet makers, performing artists, writers, designers, and performs both traditional and new pieces. Its repertoire includes Jade Lotus, White Snake, and The White Bone Demon, as well as shorter numbers created to highlight specific traditional techniques, such as “Stroll around the New City”, “Umbrella Dance”, “Long Scarf Dance”, “Face Changing”, and “Puppet Calligraphy” (in which the puppet does the writing).

The troupe has performed in many national arts and puppetry festivals on behalf of Sichuan, including the 2nd Chinese Arts Festival, the 5th Chinese Arts Festival, the Joint Performance of National Puppet and Shadow Shows, and the Golden Lion National Puppet and Shadow Shows Competition, and has been awarded prizes for performance, puppet sculpting, and stage design. Sichuan Giant Puppet Troupe has been recognized as an “Important Export Project of National Culture” by the Ministry of Commerce, Ministry of Culture, the State Administration of Radio Film and Television, and the General Administration of Press and Publication.