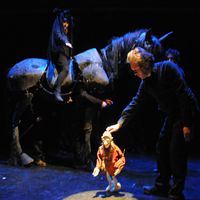 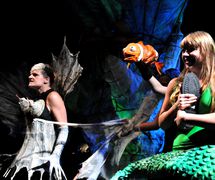 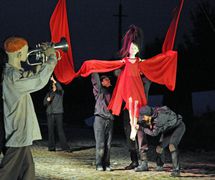 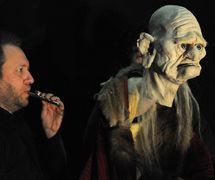 Belgian theatre company founded in Antwerp in 1986 by Marc Maillard. Since 1997, Maillard has collaborated with Hetpaleis, Flanders’ largest theatre for children and youth. Also since 1997, Theater Froe Froe has had the use of a space, Vrije Val II, located on the quays of the Scheldt, with a rehearsal room and workshop. Froe Froe uses a multiplicity of formal techniques and disciplines: “bunraku-style”, latex, video, alternating with rigid or aerial figures that sometimes become part of the stage set. The performances, with live music, always combine both puppets and actors.

The repertoire is international and calls on the works of well-known writers: Eet mij (Eat Me), a [commedia dell’arte] piece based on Lewis Carroll; Dido, based on Purcell; Love in Babylon by Johan Buytaert, a cultural-multimedia mix; De Kop en de Duvel (The Head and the Devil), using traditional Antwerp puppets; Orfée (Orpheus) by Buytaert, the myth about Orpheus’ crossing by swimming to Hades. Froe Froe also undertakes tours, organizes workshops for performers and rents out its space for other groups.