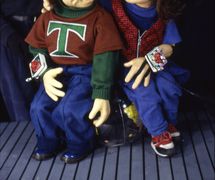 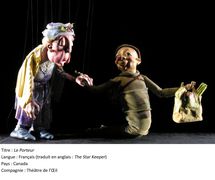 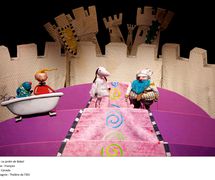 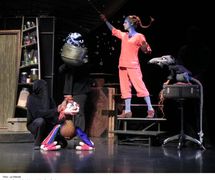 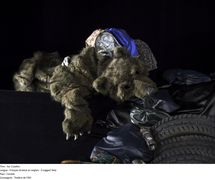 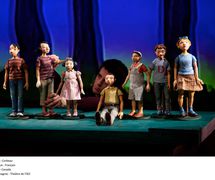 Canadian puppet company founded in Montreal in 1973 and directed by André Laliberté. Théâtre de l’Œil (Theatre of the Eye) is intended primarily for young audiences. Over twenty productions testify, through their poetry, the dramatic and scenographic freedoms permitted the multifaceted and universal art of puppetry. Several Quebec authors and designers have fuelled the imagination of numerous spectators, thus contributing to the development and recognition of this art in Quebec and abroad. Over the years, several awards have confirmed the maturity of the company and its mastery of its art.

In 2001, Le Porteur / The Star Keeper (created in 1997) received the Chalmers Award for outstanding Canadian play for young audiences, and three “Masques” from the Académie Québécoise du Théâtre (Quebec Theatre Academy) in 1999. In 1997, Zoé perd son temps (Zoe Loses Her Time, 1995) received a UNIMA-USA Citation of Excellence. At the beginning of the 1980s, the Théâtre de l’Œil, Les Deux Mondes and Le Carrousel laid the foundation of what was to become La Maison Québécoise du Théâtre pour l’Enfance et la Jeunesse (Maison Théâtre). Today, this Montreal institution is a world-renowned artistic crossroads.

Théâtre de l’Œil has also ventured into the challenging world of film. The company collaborated on La Force du Soleil (The Strength of the Sun), a 3-D educational movie produced by IMAX and shown all over the world. In 2001, several company members worked as stage directors, artistic directors, designers and puppeteers on Hugo et le Dragon, a cinematographic production that won prizes at the Banff Television Festival and at the 17th Gala des Prix Gémeaux in 2002.