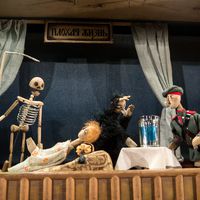 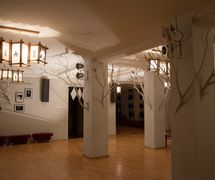 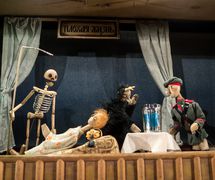 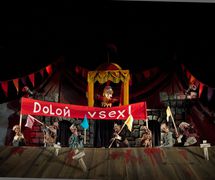 Russian puppet theatre, founded in the city of Arkhangelsk in 1933 on the initiative of Aleksandr Engelgardt, the artistic director of the Youth Theatre, who then headed it until the 1940s. The theatre’s repertoire was mainly divided between adaptations for children of the Russian classics (Aleksandr Pushkin, Nikolai Gogol, Pyotr Yershov) and the contemporary puppet drama (notably Samuil Marshak, Nina Gernet).

During World War II, the company became a “theatre of musical revue and puppets” and staged satirical war revues at the Front. The generation of its founding fathers lived and worked through the most difficult years up until the 1970s. Then, in the time most revolutionary for Russian puppetry, the company was completely rejuvenated by the incoming young artists, among them Elena Nikolaeva (principal designer since 1973) and Dmitry Lokhov (artistic director since 1986), who succeeded in maintaining the theatre’s national top five position for decades.

The production Vertep (1996), which received a Golden Mask Award (the prestigious Russian theatre prize), was one of the first professional attempts to delve into the once-forbidden religious theatre form (see Vertep, Ukraine) and an intricately designed theatrical excursion into the history of various puppetry types and tricks. Vertep became a national hit. Another Golden Mask was awarded to actress, Svetlana Mikhailova, in the nomination category, “The Best Puppet Theatre Actress”, for the role of Gertruda in Khamlet, datsky prints (Hamlet, the Prince of Denmark) based on William Shakespeare’s tragedy and directed by Dmitry Lokhov.

Since 1986, the Arkhangelsky oblastnoi teatr kukol (Arkhangelsk Regional Puppet Theatre) performs in its own permanent premises. The theatre has hosted Ulitka (Snail), a Chamber theatre festival. The repertoire remains balanced between material for children and adult audiences, with the company working successfully in most traditional puppet genres. It also remains one of the few Russian theatres with a training department engaged in activities involving its audiences (children, parents, teachers – in a separate or mixed forum). The Tainoe obschestvo ljubitelei kukol (TOLK, Secret Puppet Lovers Society) has operated in the theatre since 1985, bringing together educators, psychologists, theatre-makers, and interested adults.