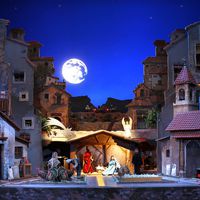 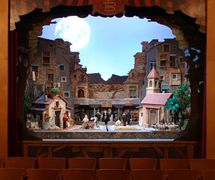 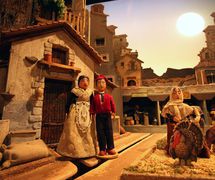 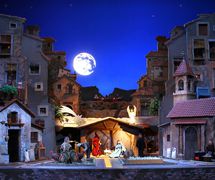 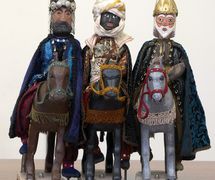 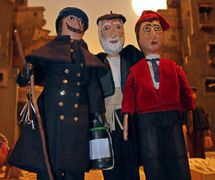 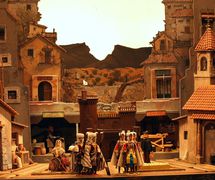 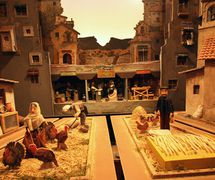 Traditional crib (crèche) performed with puppets from the town of Alcoy, between Alicante and Valencia in Spain. The Belén de Tirisiti (full name Betlem de Tirisiti; in English, Bethlehem Tirisiti) is a Nativity scene traditionally performed at Christmas. This unique rod puppet theatre includes scenes that depict the birth of Jesus, the Adoration of the Shepherds, the arrival of the Magi, and the flight into Egypt, interspersed with scenes of everyday life.

Tirisiti is the name of the main character, the innkeeper, and is an altered version of his wife’s name, Tereseta. The commercial links between Alcoy and Catalonia in the north and the Balearic Islands in the east may have influenced certain characteristics of this character. Puppets called teresetes can be found in the Balearic Islands, but Tirisiti has a barretina, a typical Catalan bonnet, covering his head. The name’s alteration is due to the use of the lengüeta (the swazzle), the vocal accessory of early puppeteers.

In the middle of the 19th century, puppeteers passed through Alcoy during Christmas time to perform purely religious Nativity plays in which they incorporated everyday scenes and popular characters. This oral custom was passed down and led to its current form, a faithful version of the original performance. The scenes are not split up into distinctive acts, but the storyteller delineates each through the language that is used. For example, the sacred Nativity scenes are narrated in Castilian, while the other scenes are in Valencian.

The characters are mounted on vertical rods. Each puppet is manipulated with a rod from below, under the floor base, and sometimes an arm can be moved with a wire or thread. This style of manipulation with rods, called de pie y varilla (on foot and by rod), is no longer used today. It involves a fairly complex set design, which incorporates a number of small rail guides. The puppets may be set against these rails, or they may be moved through them, lengthwise and crosswise, by the puppeteer who is manipulating the rod from below the stage. The set itself portrays a typical village with its square, its church, the inn and shops, while the musical accompaniment includes popular Valencian songs and pasodobles.

Apart from Tirisiti, the innkeeper, the characters are, in order of importance, his wife Tereseta, Tereseta’s mother, the watchman and grandfather. The priest, the sacristan, and the altar boy represent the Church. The bullfighter and the bull, the harvesters, the pious women, and the chestnut seller are among the other characters that appear in the popular, secular parts. The Holy Family, the Magi, and St George (San Jorge, Alcoy’s patron saint) appear in the sacred scenes. All these characters are guided by the narrator’s voice that uses a common thread to unify the whole show.

The Belén de Tirisiti brings back a tradition dating from the 19th century and was classified as a cultural artefact (“Bien Cultural Inmaterial”) by the Valencian community in 2002. It is performed today at Christmas time.