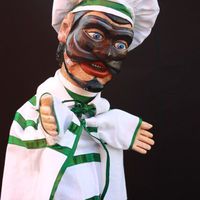 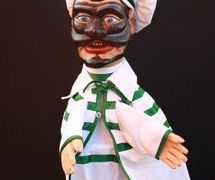 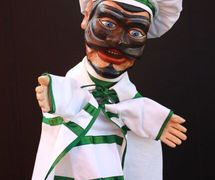 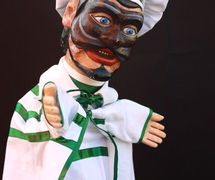 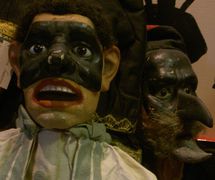 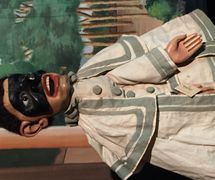 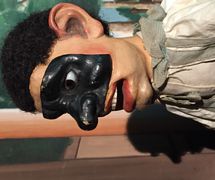 Italian character from the commedia dell’arte classified from the start as the first Zanni and known to have been a puppet since the 18th century.

Like Arlecchino, Brighella originated in Bergamo, but he proves to be cleverer and more cunning than his companion, even if their roles can often be reversed in the course of the play. A specific feature of Brighella is his musical ability, and he is always depicted playing a stringed instrument. He wears a full and rather shapeless white costume, like all the other Zanni, with in addition green strips which become more and more important until finally he developed a green and white cloak. These are the characteristic colours of Brighella and other Zanni like him, of which the most famous is Scapin. His purplish mask has a cynical and mocking expression; he squints and has a very large nose and lips. The origin of his name is subject to discussion but may be related to “briga” (an intrigue or quarrel).

Brighella appeared on the stage relatively late in comparison with the other Zanni. He is first mentioned in 1603, in a non-theatrical context, after which he became established as the first Zanni, together with Arlecchino, Pantalone and the Dottore (Doctor), becoming increasingly successful up to the 18th century when Carlo Goldoni in many of his comedies transformed him into a wise and responsible servant and gave value to his musical abilities.

Brighella obviously had his place on the marionette and glove-puppet stage even if it is quite difficult to establish his presence historically. His presence is confirmed in a manuscript in the Biblioteca Nazionale Braidense in Milan, L’Elogio di Romanino (In Praise of Romanino), which refers to Giovanni Bertelli, known as Romanino (c.1725-1783), the adopted son of Massimo Bertelli, also known as Romanino, who is praised by Francesco Saverio Quadrio in Della storia e della ragione d’ogni poesia (1744). In this manuscript he evokes some of Bertelli’s scenarios, including Brighella chincagliere (ironmonger).

The Bethnal Green Museum in London (also known as the V&A Museum of Childhood, a branch of the Victoria and Albert Museum) has a Brighella amongst its 18th-century marionettes.

In the eleven years between 1848 and 1859, Brighella appeared on the stage of Lampugnani, a puppeteer who included political satire in his performances. Such satire at the expense of Austrian domination had already been indulged in Verona around 1840 by Giovanni Valletto, who ended up in prison after a scene in which Brighella and Arlecchino made fun of the Austrian government.

The character of Gioppino from Bergamo, invented by Battaglia at the beginning of the 19th century, was accompanied by Brighella amongst others. In a manuscript scenario from Emilia, the celebrated 19th-century bandit, Il Passatore, was surrounded by Austrian soldiers together with other brigands, and also Pantalone and Brighella.

In the 20th century, Brighella is found less except in the repertoires of Francesco Campogalliani and Italo Ferrari.

Cesare Maletti (1926-1992), a descendant of Egidio Maletti, wrote a semi-comic, semi-serious piece in which Brighella appears as a squire.