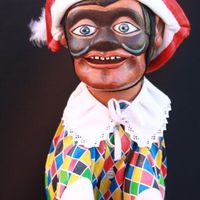 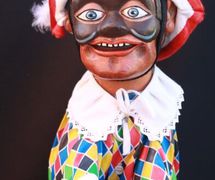 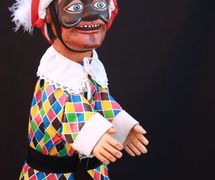 Character of the commedia dell’arte, second Zanni, probably of medieval origin. Tracing the origins of the name and existence of the character is extremely complex. In the Middle Ages there were carnival characters of diabolical buffoons known as Herliquins or Hellequins. In France in particular they had a theatrical role. There were even mimes of classical origin that had Hercules as a comic figure (Herculinus, from which Herlequin), whilst Dante has a devil called Alichino who has rallied together an obscene band of mocking devils.

Whatever its origins, this “mask” (maschera, stock character) took shape and developed its own specific style in the theatrical forms of the 16th century, most notably in the scenarios of the commedia dell’arte. It appeared for the first time in a document published in Paris in 1584, the Prologue to Fiammella by the comic writer Bartolomeo Rossi, where “Arlequin” was mentioned together with “Pedrolino” (the future Pierrot) and “others who imitate amusing characters of this sort”.

Jacques Callot (1593-1635) depicted him in his Balli di Sfessania (Dances from Sfessania), engravings which show pairs of masked figures dancing on public squares, with small figures in the background.

Having been introduced to France, and then perhaps to Spain, between 1574 and 1584 by the actor Alberto Naselli, known as Zan Ganassa, Arlecchino began his theatrical career and built himself a history.

Born in the Brembana valley (Bergamo), he wears a cloak, a shirt and white breeches, flat shoes and a two-pointed hat; from his shoulder hangs a satchel (scarsela) and he has a stick in his hand (batocio). A leather mask emphasized the diabolical origins of the character which became gentler with time when his large mask became a simple black silk domino mask and the costume was decorated with pieces of coloured fabric organized according to a more or less fixed pattern, whilst his headdress became a felt hat with the brim turned up on one side. The main features of Arlecchino were his condition as a rather stupid servant, always cheeky and hungry (but able to be cunning and leave his domestic position to exercise the most varied professions), speech full of slang, mimicry and acrobatic skills which was maintained by every performer of the part from Tristano Martinelli (1556-1630), Domenico Biancolelli (1646-1688), Angelo Costantini (1670-1729), David Garrick (1716-1779), right up to contemporary actors such as Marcello Moretti and Ferruccio Soleri.

Almost immediately and inevitably Arlecchino, and with him nearly all the other characters of the commedia dell’arte, found a place on the puppet stage. In Venice and Paris, especially, puppet booths popped up in the open on public squares. These booths could be found almost everywhere in Paris, for example: on the Pont-Neuf and later at the fairs where they indulged in parody of the official theatre, such as the Comédie-Française, on the boulevards, in the neighbourhood of the Palais-Royal, and on the Boulevard du Temple where, later, Jean-Baptiste Nicolet, himself the son of a marionette showman, opened a theatre in 1759 which subsequently took on the name of the Théâtre de la Gaîté.

Arlecchino was always one of the main characters in these shows which even someone like Carlo Goldoni would have seen. At the Ambigu-Comique, Nicolas Médard Audinot was also very successful as a marionette showman.

In Venice, shows were given on the Campo Santa Margarita and on the Piazza San Marco, where a 17th century print shows a very lively crowd watching the antics of Arlecchino, Pulcinella, Pantalone and their likes. Sources mention among other puppeteers working in Venice Ottavio Paglialonga (1670-1734) and Alberto Bordogna (1685-1765) who made reference in their performances to topical events of the day in the city and used the characters of Pulcinella, Pantalone, Arlecchino and the other “masks” of the commedia dell’arte. In the 18th century, the mansions of the nobility, such as that of Abbé Angelo Maria Labia were also venues for puppet shows, and the Grimani ai Servi palace had a very sophisticated theatre. Some of the figures, including Arlecchino and Pantalone, belonging to the collection of Maria Signorelli, were exhibited in Rome in 1980 at the Biblioteca di storia moderna e contemporanea.

There is plenty of evidence of the presence of Arlecchino in the puppet theatres of the 19th century. Luigi Lupi began in the Vanchiglia suburb of Turin, presenting short comedies with Arlecchino as the main character. His Arlecchino was later replaced by Gianduja, but never completely abandoned, as is indicated in 1887 by the Gazzetta del popolo della domenica, which mentions an Arlecchino who is more acrobatic than ever, thanks to a new system of operation.

In Rome, Arlecchino was flanked on the stage by both new and old “masks” and it was for him that an old commedia dell’arte scenario with the theme of the mock doctor, which Molière used to advantage, came to the surface, as is indicated in a 19th-century scenario published by Renata and Roberto Leydi: Le metamorfosi d’Arlecchino finto morto, esposto all’anatomia, astronomo stravagante e medico per necessità (The Transformations of Arlecchino, Pretending to be Dead, Laid Out in an Anatomy Room, an Extravagant Astronomer and a Doctor Perforce). Likewise, this is the subject of a manuscript scenario held by the National Library in Rome: Il Basilisco di Bernagasso con Arlecchino mercante (The Basilisk of Bernagasso, with Arlecchino as a Merchant), a “three-act comedy in prose to be performed on the marionette stage. Designated for use by Adriano Valeri. For the summer season of 1807 in the theatre established in the Mausoleum of Augustus …”

In the 20th century (1914), Ugo Campogalliani performed a piece in Rome at the Teatro dei Piccoli: Arlecchino paga debiti alla moda (Arlecchino Pays His Debts in the Fashionable Way). This piece was also in the repertoire of Francesco Campogalliani. The journalist and writer Enrico Novelli (pseudonym Yambo, 1876-1945), described this in the Gazzetta del Popolo of January 17, 1931 in an article entitled “Un ‘Arlecchino’ di Campogalliani”, a fantastic drama in four acts with magicians, serpents, fairies, warriors and …Fagiolino tormented by Arlecchino and Brighella.

Umberto Tirelli (1871-1954), a cartoonist and caricaturist who later became a puppeteer, strongly inspired by topical events, transformed a historical character into Arlecchino in a show called L’On. Arlecchino (Arlecchino, Member of Parliament). The Ferrari family company, I Burattini dei Ferrari, used Arlecchino in their performances, as can be seen in the lovely woodcuts of Aristide Barilli. Also, puppets of Arlecchino are to be found in various collections of theatrical materials.

As we can see, what evidence we can get from written texts is slight as far as shows with Arlecchino as the main character are concerned, and this is the case for the other characters of the commedia dell’arte, given the improvisational nature of the genre. On the other hand, this character who can never go out of fashion is to be found everywhere in different art forms that go well beyond the theatre itself.