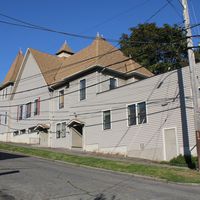 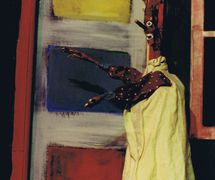 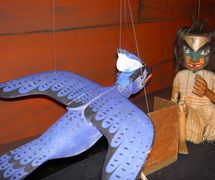 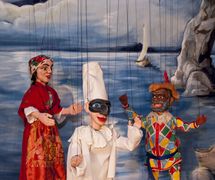 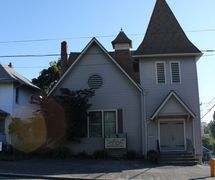 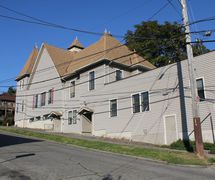 American puppet company founded by Stephen and Chris Carter in Seattle, Washington (state), in 1983, with its own Center, including a puppet theatre, museum and library, established in 1988. The Center presents performances by the Carter Family Marionettes as well as selected guest artists. It provides educational outreach, teaching puppetry skills and cultural knowledge to children and adults, and preserves and promotes international traditions of puppetry. The Center’s performances tour within and outside of the state of Washington state.

Stephen (b.1952) and Chris (b.1953) Carter attended the University of California, Santa Cruz, after their marriage where Chris majored in dance and Stephen majored in sculpture, while pursuing their interests in theatre. In 1973-1974, Stephen Carter spent a year studying in London where he became active with street theatre, presenting Punch and Judy as his final university project. In 1975, along with several friends, the Carters were founding members of Family Bathtub Puppet Theater with a shared venue, The Puppet House, near Pike Place Market. In 1980, the Carters and another family (Todd and Joby Moore and their children) created a new troupe, Theater Picaro, which toured extensively, receiving the UNIMA-USA Citation of Excellence for Miraculous Kasper (1982).

In 1983, Carter Family Marionettes was established with Stephen, Chris and their children Heather (b.1974) and Dmitri (b.1977). The children have been active members of the ensemble from the beginning. In time, the grandchildren – Xajida, Eugenia and Francisco – would also perform with the company. For the next two years the Carter family lived in Romania, where Stephen had a Fulbright Fellowship, receiving his postgraduate degree from the Institute of Theatre and Cinema in Bucharest. During that time, he worked closely with Teatru Ţăndărică master carver Iulius Suteu. Iulius continued to collaborate with Carter Family Marionettes for many years, including on The Yellow Dwarf with a cast of marionettes (string puppets) carved by Iulius and Stephen. This production has been seen at many festivals and received the UNIMA-USA Citation of Excellence (1993).

Over the years, the Carters have trained with master puppeteers of Romania, Sicily, and China. They have collaborated on three productions with Yang Feng (1951-2003), a fifth generation puppeteer from Fujian China who arrived in the United States in 1991.

In 1988, Chris and Stephen created a permanent venue, Northwest Puppet Center, initially renting space in a community centre. The Center moved to a new home in 1993 when they purchased and renovated a church in the Maple Leaf neighbourhood of Seattle, housing their theatre, museum and library.

Having studied and collaborated with many great artists, the Carters have become especially known for their preservation of traditional puppet theatre. Thanks to Duane Pasco, George David, and many Makah elders, the unique Northwest Coast artistry and culture was brought to the stage with Q’we-ti: Tales of the Makah (1992), for which they received another UNIMA-USA Citation of Excellence award, and Raven & the Box of Daylight (1999). The Carters are known in the United States for their mastery and preservation of the traditional Sicilian marionette theatre, Opera dei Pupi (see Pupi). For the past several decades, they have been the most active practitioners of Opera dei Pupi in the country.

The Carter Family Marionettes have been featured performers at national and international puppetry festivals from Scotland to Uzbekistan. They have presented their plays in five different languages and have been invited as guest director/designers internationally. Chris and Stephen Carter were the directors of the 1999 Puppeteers of America Festival of the Millennium held at the University of Washington (August 1999).

Dmitri Carter grew up with puppetry. Since 1999, he has served as development director for the Northwest Puppet Center. Dmitri also conducts research, curates exhibitions, teaches educational programmes, writes articles, documents a variety of puppetry techniques with video and photography, and performs regularly. In 2003, he studied in China. He has worked on projects in Italy, Brazil, Spain, China, and Israel. Xie Zheng Yang (daughter of Yang Feng) studied at the Zhangzhou School of Puppetry and later was reunited with her father in Seattle. In 1998, Dmitri Carter and Xie Zheng Yang married.

Over the years, the Carters have acquired a large collection of over 1,000 puppets from around the world. This includes a 19th century cast of commedia dell’arte burattini (glove puppets) and a marionette (string puppet) from Turin, as well as pupi (Sicilian rod marionette puppets) created by Palermo’s master puppet builder, Vincenzo Argento. The puppet collection is exhibited at the Northwest Puppet Center, which also houses an extensive library open to researchers and puppetry lovers with over 1,000 books. Lettie Connell Schubert’s personal library with over 1,500 publications was donated to the Northwest Puppet Center. Another major collection of books, The Josie Robbins Collection, was donated by Seattle’s Museum of History and Industry. Other collections donated to the Center include those from Janice Dohm, Bob Burns, and Lea Wallace (thanks to Puppeteers of America).

Over a period of seventy years, Alan Cook of Southern California amassed a collection of approximately 5,000 puppets. This world-class endeavour, abetted by the long-term, visionary support of Jackee Marks, became known as the Cook/Marks Collection at the International Puppetry Museum in Pasadena, California. In 2010, Cook and Dmitri Carter agreed to transfer the bulk of the collection to the Northwest Puppet Center, where it is expected to prove a transformative contribution to the Center’s museum. Eventually, Alan Cook’s extensive book collection would also reside at the Center.