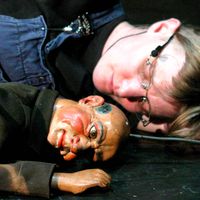 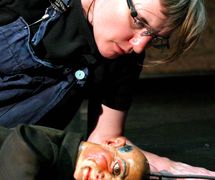 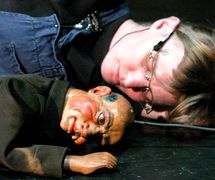 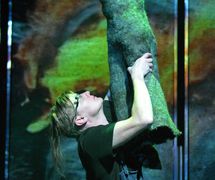 British company of puppets and objects founded in Manchester in 1991 by puppeteer Nenagh Watson and painter Rachael Field. The Doo-Cot company explored the relationships between the staged performance and fine art and their shows worked across and between forms, in particular computer, film and digital animation of painting and action. Their work had a strongly urban dimension and the puppets and installations were often made from objects discarded from their immediate surroundings. They devised their own shows and toured nationally, recognized for their pioneering and experimental work in both the fine art and puppetry worlds.

National touring shows included Cages (1992), Peacock (1994), ODD if You Dare (1995), Ultra Violet (1997), Frankenstein (1999) and Golem (2003). Watson and Field were interested in the conflict between the simplicity of puppet animation and the technological world. Their shows explored themes ranging from urban violence, the homeless, sexuality, creation and destruction. They were also commissioned to create many exhibitions and installations, winning a number of awards for their original and provocative work. Doo-Cot closed in 2009.