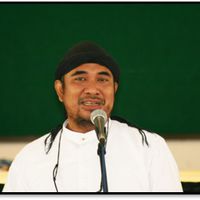 Indonesian puppet master (dalang). Tracing his dalang lineage back to R.M. Singadimedja of Bagelan, a puppeteer at the time of Sunan Amangkurat (1646-1677), Ki Enthus Susmono has earned the name “dalang edan” (crazy dalang) for his innovations in puppet making, story presentation, and wild humour (Ki is an epithet of respect accorded to a senior dalang of wayang). Son of Dalang Soerjadiohardja and his third wife Tarminah, Ki Enthus emerged as a superstar in the 1980s, and constant innovations have guaranteed thousands of spectators at each presentation.

Trained in both wayang golek (rod) and wayang kulit (shadow theatre) traditions, Ki Enthus has often been attacked by traditionalists. He firmly believes that wayang must adapt to attract the young and sees himself as following in the footsteps of the wali (Islamic saints) who used puppetry to inspire and educate during the Islamization of Java. Ki Enthus is a prolific maker of wayang: 1491 puppets are credited to him by the Indonesian Museum of Records. His figures are often altered from traditional patterns, and realistic skin colours and facial features may replace traditional designs. Some of his best-known puppet figures respond to current issues. In the 21st century, he introduced figures like Osama bin Laden, Saddam Hussein, George Bush, as part of his “wayang planet” and, in 2006, he created new mountain/tree of life figures, Gunungan Tsunami Aceh and Gunungan Harry Potter. A Barack Obama puppet appeared in 2008.

Ki Enthus Susmono composes new music that combines traditional gamelan (gong-chime orchestra) and Western instruments. Wayang Wali Sanga (Wayang of the Nine Saints, 2004-) explores the Islamic roots of wayang. Wayang Santri (Wayang for “Orthodox Muslims”), with accompaniment that mixes in traditional drumming and chant, is one of his most popular styles of presentations in 2010-2012. These more Islam-focused performances have opened the doors of some pesantren (Islamic schools) to his contemporary wayang performances. While performers don white dress or turbans as outward signs of the Muslim focus, the clown scenes are still filled with the drunken puppet, who mistakenly quaffs his own urine, and sexual banter in the clown episodes.

In 2005, Ki Enthus was named best dalang at the Wayang Festival (at Taman Budaya) in East Java. In 2008, he performed at the International Wayang Festival in Bali. He has often included anti-drug, HIV prevention, or family planning messages in his performances. His figures have been displayed internationally at Museum of International Folk Art (Santa Fe, USA, 2010-2011) and Tropen Museum in Amsterdam which titled the exhibit: “Wayang Superstar: The Theatre World of Ki Enthus Susmono (2009)”.