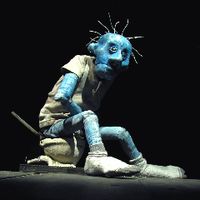 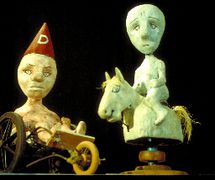 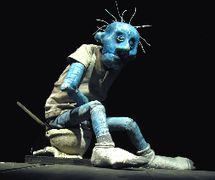 British company founded in 1987 in London by Liz Walker and Gavin Glover, producing puppet and animation theatre for adults. Faulty Optic pioneered a unique style of puppetry which quickly found national and international fame. The shows were grotesque and surreal, darkly comic and original, featuring hybrid object and human characters dominated by obsessive domestic rituals and frequently marked by death, played within animated sets and always with excellent manipulation.

Walker and Glover’s interest in all forms of puppetry, video, film, installation, surrealism and live music were manifest in many of their shows: the first was My Pig Speaks Latin (1988), a trilogy of three short pieces exploring toy theatre, chess and sculpture; Snuffhouse Dustlouse (1991) in which a being, half-man, half-sack, seeks the remains of his parents in an atmosphere of absurdity and solitude; Darwin’s Dead Herring (1993) based on nightmare visions of evolution and genetics; Shot at the Troff (1998), a trilogy of the company’s recurrent themes, i.e. the triviality of the everyday, the tyranny of household and domestic objects and rituals, and the techniques of slapstick; Soiled (2003-2004) which included a sparrow with Tourette’s syndrome and a pugilist ballerina. Other shows include Licked (2004), Horsehead (2005), Dead Wedding (2007).

Faulty Optic experimented with forms and materials (one piece took place under water). They ran workshops and residencies in training institutions internationally and collaborated with other artists, in particular film-makers and musicians, on specially commissioned works, installations and exhibitions. They were frequently invited to perform at international puppetry and small-scale theatre festivals, and won a number of prestigious awards. The company was dissolved in 2011.