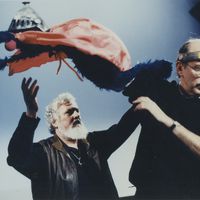 American director and puppeteer. Frank Richard Oznowicz was born in England on May 25, 1944. His parents Isidore (known to all as Mike) and Frances Oznowicz were amateur puppeteers in their native Belgium. They emigrated to the United States in 1951, settling in Oakland, California. Mike and Frances were active in the American puppet community, taking leadership roles in local and national organizations.

With the help of his parents, Frank Oz began puppeteering at age 12, performing at birthday parties, fairs, church bazaars, and anywhere else so that he could earn extra money while still going to school. At the same time, Frank apprenticed for several years at the puppet theater at Children’s Fairyland in Oakland, California, guided by Dorothy Hayward.

After his time at Children’s Fairyland, Frank assisted Jerryl Juhl (future Muppets head writer) at The Vagabond Puppets, a three-person troupe which would take a puppet trailer from school to school in the summer and perform for children on the playgrounds. In 1961, Oz and Juhl met Jane and Jim Henson at a Puppeteers of America festival in Asilomar, California. Juhl went to work for Henson shortly thereafter and Oz followed in 1963.

Frank Oz began his career apprenticing on The Jimmy Dean Show by being the right hand of Jim’s Rowlf the Dog. In the ensuing years, Frank learned from Jim as they worked on various television variety shows and dozens of television commercials.

Frank’s television work with the Muppets became his primary focus leading up to the premiere of Sesame Street in 1969. On Sesame Street, Oz eventually performed some of the show’s best loved characters including Bert, Grover, and Cookie Monster.

Beginning with Star Wars: The Empire Strikes Back in 1981, Frank Oz has performed the unforgettable Jedi Master Yoda in all Star Wars films.

Frank has also acted or provided voices in numerous features including The Blues Brothers, Trading Places, Monster’s Inc., Inside Out, and others.

Frank Oz’s movie directing career began in 1981 when Jim Henson asked him to help direct Jim’s The Dark Crystal. Oz co-wrote, performed in and directed The Muppets Take Manhattan, and his first non-Henson directorial credit was the film adaptation of Little Shop of Horrors in 1986. After that, he became much sought after as a feature film director and his directorial credits include Dirty Rotten Scoundrels, What About Bob, Housesitter, The Indian in the Cupboard, In and Out, Bowfinger, The Score, Stepford Wives, Death at A Funeral, and, in 2017, a documentary Muppet Guys Talking.

Along with his film efforts, Frank Oz has directed several works for live theater including Terrible Advice in London and In and Of Itself in Los Angeles and New York.

For his work on The Muppet Show and Sesame Street, Frank Oz is the recipient of four Emmy Awards. He has also received numerous other honors including two George Foster Peabody awards, The American Comedy Awards’ Creative Achievement Award, The Art Directors’ Award, three gold and two platinum records, and, in 2012, a Saturn Lifetime Achievement Award from the Academy of Science Fiction, Fantasy and Horror Films.