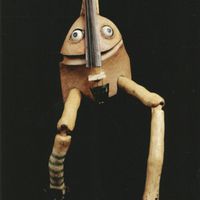 Garlic Theatre tours theatres and festivals worldwide, using image, puppet animation, movement and music to produce imaginative stories, some adapted and some original, for young people that are also stimulating and entertaining for adults.

Influenced by Jacques Lecoq, the company conceive their work through play and improvisation. At the heart of the work is the relationship between the clown and the puppet, and their productions are characterized by an innate English sense of slapstick. The company’s work at present encompasses thirteen productions in various techniques of puppetry, and includes their internationally popular production of George and the Dragon (1997), The Sorcerer’s Apprentice (2004), The Magnificent Flying Machine (2007), Fiddlesticks (2002), about the spirit of a broken violin. There’s a Monster in my Piano and The Forgotten Tailor, their first adult show, are currently (2012) in development.