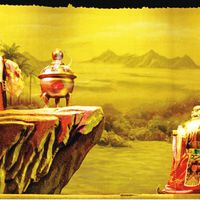 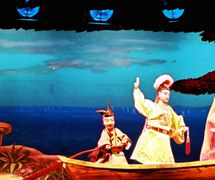 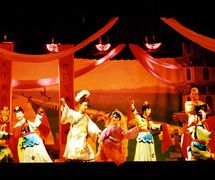 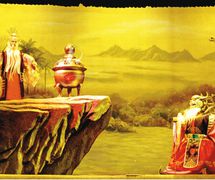 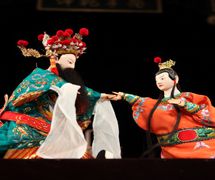 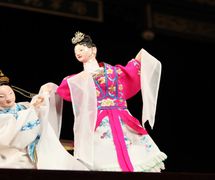 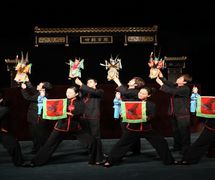 Chinese glove puppet company based in Jinjiang (Fujian Province). “Palm puppets”, performed with lifelike movements and amazing acrobatic skills in southern Fujian and Taiwan, have enjoyed a history of over 1,000 years. Rigorous training allows professionals to communicate skills from generation to generation. Rich arias and music, clever and humorous language, and delicate and exquisite figures with bright costumes and props combine in this highly refined art. Plays display distinct features of their regional cultures.

By the turn of the 20th century, Jinjiang puppet artists had already migrated to South East Asia. This established this form of Chinese puppet drama there as well.

In 1953, the Jinjiang Hand Glove Puppet Troupe was established as a government funded organization. Since then the troupe has undertaken many special performances for top government leaders, and has toured to the United States, Germany, France, Australia, the Philippines, and other countries in Europe and Asia for performances. It won the Gold Award in the Second International Puppet Festival Competition held in Bucharest, Romania. A newly created drama, Five Li Rainbow, won the Chinese Wenhua prize in 2000. Qingyuan Fairy won the Silver Award of the Second National Puppet Shadow Play Competition, and Marriage of Human and Puppet won the Excellent Programme Award in the Third National Minority Culture and Art Performance. Chenxiang Rescues His Mother, Wu Song Fights the Tiger, and Daming Mansion are frequent productions. Rabbit and Rooster vs. Fox was presented at the 21st UNIMA Congress and World Puppetry Festival held in Chengdu (Sichuan Province) in 2012, and Kang, the Bear was presented at the Shanghai World Exposition in 2010.

In 2006, the Jinjiang Hand Glove Puppet Troupe was among the first groups listed in the National Intangible Cultural Heritage Protection Directory, and the troupe embraces the task of carrying on and protecting this Fujian glove puppet style.