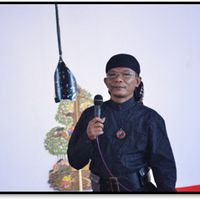 Indonesian puppet master (dalang) of Javanese wayang kulit (shadow theatre) known for his modernizing of the form. As a child, Ki Jlitheng Suparman, son of a construction worker, studied wayang with his grandfather Ki Guno Sudaryo and Ki Sugino in Ngadirojo village, Wonogiri (Ki is an epithet of respect accorded to a senior dalang), and continued his education in 1986 at SMKI Surakarta (Sekolah Menengah Karawitan Indonesia, Indonesian High School of Music). He performed in order to earn money to pay for his education while still a literature student at Universitas Sebelas Maret Surakarta (Nineteenth of March University). From 1995 to 1997, his strident critique of President Suharto’s New Order inequities and his irreverent modernization of traditional puppetry with contemporary music and current issues caused him to be blacklisted by dalang organizations. With reformasi (reform after Suharto’s 1998 ouster), Ki Jlitheng created wayang kampung (village wayang) with Suharman, a puppet maker and lecturer at Surabaya Teacher Training Institute (IKIP, now Universitas Negeri Surabaya, Surabaya State University).

“Social Perspectives on Prostitution” was the group’s first piece with a written script by Yayat Suhiryatna: it had prostitutes flooding the city when police closed down the brothels. When Suharman returned to Surabaya the company became wayang kampung sebelah (Half Village Wayang).

The music of his wayang performances is a modern mix of dangdut (Indonesian pop), keroncong (Portuguese inflected song), campursari (modernized gamelan, the gong-chime orchestra) and rock and roll, earning Ki Jlitheng the nickname of “rock and roll dalang”. Instead of classical plays, he innovated scripts such as the English titled Who Wants to Be Lurah, about corruption in village headman elections, and Jual Beli Mimpi (Buying and Selling Dreams) critiquing television dramas’ distorted values. Eschewing wayang‘s archaic language, Ki Jlitheng makes all the material accessible. His plots, with workers, farmers, and prostitutes, speak to lived experience rather than wayang‘s rarified world. His performances have been invited to Jakarta and have won him the popular audience.

In 2010, Ki Jlitheng Suparman began performing wayang climen (simple puppetry), which uses eight musicians and two singers rather than the thirty that might perform in a traditional show. He uses a small screen and performs only half the night (four hours) for half the price (5,000,000 rupiah or US$550). He feels that wayang must adjust to the era and his viewers agree.