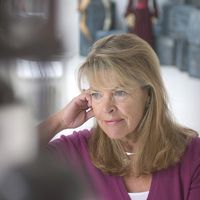 Finnish theatre director and puppet theatre manager. Kirsi Siren (then Kirsi Aropaltio), a graduate from the Theatre Academy of Finland in 1970, was involved in founding Nukketeatteri Vihreä Omena (Green Apple Theatre) in 1971. In 1975, she established Teatteri Hevosenkenkä (Horseshoe Theatre) in Espoo. She is known for her pioneering contributions as a theatre artist and a cultural politician.
Kirsi Siren has directed over thirty puppet productions and turned numerous texts into dramatized versions for the puppet stage including: Mestaritontun seikkailut (The Adventures of Master Brownie, 1977, based on Aili Somersalo); The Snow Queen (based on Hans Christian Andersen, 1978); Princess Goldilocks (1982); and The Ugly Duckling (1989). Her literary works include several puppetry manuscripts for television and film, articles, reviews and criticism. Among her more recent productions are The Snow Ball Prince (1995), Sleeping Beauty (1999), The Adventures of Little Panda in the Nursery (2001), Saku the Cellist (2004), and The Christmas of Urpo and Turpo (2009). Particularly successful with audiences was the adult play Lazy Lassi and the Spade-helve (1987), based on the works of Reino Helismaa, Finnish singer-songwriter-composer. Mestaritontun seikkailut introduced almost human-size puppets (designed by Sara Siren) performing on a panoramic puppet stage. This was totally new in Finland at the time. Since the 1990s Horseshoe Theatre has regularly visited Japan.
Kirsi Siren has held numerous positions in Finnish theatre and puppetry (President of UNIMA Finland, 1984-1985, member of the National Council for Theatre, 2001-2003, and Chairman of the Puppetry Committee of the Finnish Theatre Union since 2000).
As a councillor and a member of the City Government of Espoo, Kirsi Siren has worked to improve both the physical and mental environments for children. Her contributions to the arts and cultural policy have been recognized both locally and nationally: in 1982, she was awarded the Art Prize of Espoo City and, in 1989, the State Award for Children’s Culture. She has written the books Nukketeatteri ja naamioleikit (Puppet Theatre and Mask Plays, Helsinki, Otava, 1979) and Kultakutri ja muita näytelmiä nukeille ja näyttelijöille (Goldilocks and Other Plays for Puppets and Actors, Helsinki, Otava, 1987).