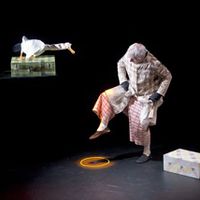 Australian puppeteer and artistic director (not to be confused with Peter J. Wilson).

Born Lyndon Peter Wilson, L. Peter Wilson was the Artistic Director of the Hobart-based Tasmanian Puppet Theatre, which he helped to found in 1970 until it ceased in 1980. Initially he and co-founder Peter Oldham had been influenced by the large-scale marionette productions of Peter Scriven and their first show was a marionette version of Hansel and Gretel.

In 1973, he was awarded a Churchill Fellowship, which enabled him to study with puppet companies in Tokyo, Moscow, Prague, Bochum and Birmingham. Back in Tasmania, he used this experience to move the company into different puppet forms, especially rod puppets and black theatre. He was a leader in dispensing with puppet booths and using the full theatre space available, often with visible puppeteers. His company became one of the two major companies to receive government funding.

Takeshi Hoshino of PUK Puppet Theatre (Ningyō-Gekidan PŪKU) and John Blundall of Birmingham were invited to direct and design shows. Wilson fostered local talent and his company’s most significant production was Momma’s Little Horror Show (1976) created with the company by Nigel Triffitt (born in Tasmania, 1949-2012), an avant-garde director who had not previously worked with puppets. The show, eventually called simply Momma’s, was popular with young adult audiences. It toured overseas, and continued to play even after the Tasmanian Puppet Theatre folded in 1979 largely because of unanticipated financial problems when it sought to establish its own permanent theatre.

Peter Wilson moved to Fremantle, near Perth in Western Australia, where he co-founded what became Spare Parts Puppet Theatre in 1981. As its Artistic Director, he again did much to encourage the growth of local talent in puppetry. Puppeteers from Japan, China, Czechoslovakia and the United States were invited to help create shows.

Having securely established Spare Parts Puppet Theatre, in 1996 L. Peter Wilson moved to Wellington, New Zealand where, in 1997, he became Artistic Director of Capital E National Theatre for Children. He left in 2010 and established his own company, Little Dog Barking Theatre Company, making a return to puppetry as both director and performer.

In Australia, L. Peter Wilson was responsible for two important puppetry festivals with international guests: the first in Hobart, Tasmania in 1979, and the second in Fremantle, Western Australia, in 1988.