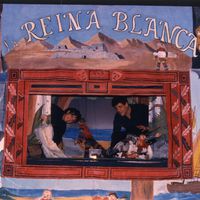 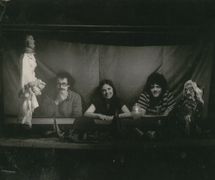 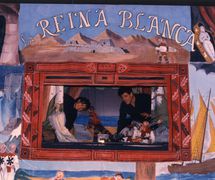 Until the beginning of the 1990s, Toni Rumbau (Barcelona, 1949), creator of Malik, the principal character in the company’s repertoire, would write most of the company’s plays. Malik, a “professional Iberian adventurer”, was a character who embodied the anarchic and adventurous dreams of his three progenitors and who would be the protagonist of the majority of their earlier shows. Rumbau’s first play featuring Malic was Malic a Babilònia (Malic in Babylon), a play for string puppets.

The troupe first performed in the streets, installing itself in the Plaça del Pi in Barcelona, and soon became well known as a Sunday feature through 1977 to 1979. Other shows followed: La Història del Rey Trist (The Story of the Sad King), Malic a la Illa de les Tortugues (Malic on Turtle Island), Aquil·les i la Tortuga (Achilles and the Tortoise), El Gegant de les Muntanyes (The Giant in the Mountains), and El Capità Caçalla (Captain Firewater). And thus Malic became a familiar character in Barcelona.

In 1980, the troupe had its first tour abroad, participating in the London International Puppet Festival. At that time it also began to mix shadows and string puppets with La Història de Li o Malic a la Xina (The Story of Li or Malic in China). The show Malic a Nova York o la Claveguera Lírica (Malic in New York or the Lyrical Sewer), was created along similar lines; it was performed in many Spanish puppet festivals and gave the company its first important successes outside Catalonia. Since 1980, La Fanfarra has toured the world with its shows and was the recipient of many awards.

In 1984, the company created a permanent base in Barcelona, the Teatre Malic (Malic Theatre), a small pocket theatre seating an audience of sixty that became a prestigious centre for alternative creations (one of the first of the so-called Salas Alternativas de España Spanish Fringe Theatres) which would proliferate throughout Spain. The company’s repertoire at the time included Calidoscòpia (with shadow puppets, text by Toni Rumbau and Rafael Sender), Las Aventuras de Malic (The Adventures of Malic, with Chinese shadows), La reina blanca (The White Queen, string puppets), and Malic Enamorat o El Retorn d’en Titella (Malic in Love or the Return of Polichinel, with Catalan glove puppets).

From the year 1990, La Fanfarra embarked on a new phase, with the three founder members creating solo shows. Toni Rumbau created A dues manos (Two Hands, a puppet play inspired by the Neapolitan Pulcinella), El Doble y la Sombra (Double and Shadow), and the opera Euridice y los Títeres de Caronte (Euridice and the Puppets of Chairon) with music by Joan Albert Amargós. In 2007, he produced and performed in the opera Salón de Anubis, with music by Joan Albert Amargós and libretto by Toni Rumbau. Rumbau’s recent show, A Manos Llenas (Full Hands), a solo show with hand- and shadow-puppets, premiered in 2009.

Mariona Masgrau produced her trilogy, Mangalena, Constantina and Sophia, and the shows La Capsa de Joguines (The Toy Box, a musical story), De Tant que T’Estimo (I Love You So Much), and El Despertar de les Passions (The Awakening Passions).

Eugenio Navarro created his trilogy, Trinoceria (1995, with puppets), Caramante (1997, with shadows) and Zespion (1999, with string puppets), and his more recent show, Melodama, which premiered at the International Sitges Festival in 2001.

In 1990, La Fanfarra published a journal of puppetry called Malic, edited in three languages (Catalan, Spanish and English), which appeared in four issues. The texts of Els Pastorets and La Llegenda de Sant Jordi by Toni Rumbau were published, as well as a collection of four different shadow puppet theatres and puppets. In 2009, the Spanish version of Toni Rumbeau’s book, Malic, la Aventura de los Títeres (Malic, the Adventure of Puppets) was published by Arola Editors. La Fanfarra has received many awards over the years.