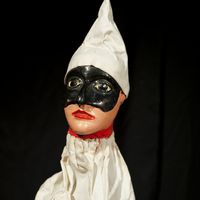 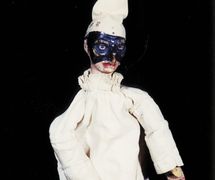 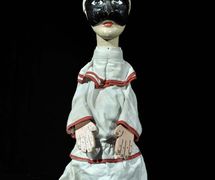 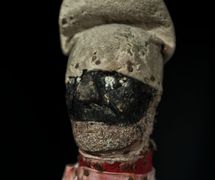 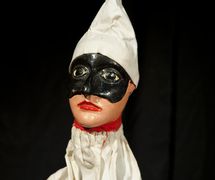 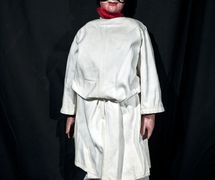 A character or “mask” (maschera) from commedia dell’arte taken up by puppet theatre since the 17th century. Pulcinella’s origins are disputed. Because the character appeared at the end of the 16th century and his costume is associated with the peasants of Acerra, near Naples, his ancestor is usually considered to be the character of Macchus, a buffoon from Atellan farce (a form of Latin comedy so called because it originated in Atella – today Aversa – and located near Acerra). A statuette dating from the first century BCE (Louvre Museum), generally recognized as Macchus, presents some physical traits similar to Pulcinella’s: a hunched/hump back, doubled by a prominent belly and a large hooked nose.

Pulcinella’s gait and swagger, as well as his characteristic squeaking, reedy voice – rendered in the puppet theatre by a swazzle (pivetta) – evoke the chicken that is the source of his name (pullicinello or pulcino), and it is said that he was hatched from a turkey egg. His rural origin is well established, but Pulcinella quickly grew accustomed to the popular neighbourhoods of Naples to draw from them his gesturality and become the city’s emblematic figure. If his origin is double, at once rural and urban, his character is also fundamentally ambivalent. He is represented in several 18th-century paintings that inspired more pulcinellini; he also has a feminine double, Pulcinellessa. This hermaphroditism immediately accentuates his profound otherness.

The transgressive character par excellence, associated with the figure of the Devil, Pulcinella obeys his master but can also defy him. Usually penniless, this sly rascal develops myriad stratagems for achieving his aims and gorging himself, but under Colombina’s tender gaze he is also a pitiable and sympathetic fool, the innocent victim of his powerful enemies. He frequently transforms himself, taking on a variety of roles but without ever renouncing the essentially populist identity that he expresses in multiple dialects. Pulcinella’s insolence and devilry are also balanced by the qualities of a generous saviour in the service of the greater good. This character trait, in addition to the role of the deceived lover, was accentuated in the pulcinellate of puppet theatre beginning in the 18th century.

After Silvio Fiorillo, who was, it seems, the inventor of this mask at the end of the 16th century, it was Andrea Calcese (called Ciuccio) who performed the role for the first time in a real theatre at the end of the Carnival festivities in Naples, April 16, 1618.  Following this the puppet made its appearance in Naples in the middle of the 17th century, keeping his black half-mask, his ample shirt and his white skullcap but most frequently deprived of his hump. Thus was born the Neapolitan tradition of the guarattelle, as Pulcinella’s plays are called – a tradition that survives even today.

Sometimes in advance of the itinerant entertainers at market fairs, Pulcinella migrated first within Italy, to Rome (from the 1620s onward), to Emilia-Romagna, and to Venice, where his popularity in St Mark’s Square was so great that he inspired namesake puppets called puricinei. In each case, Pulcinella adapted to his new environment and local language. At the same time he was becoming popular in Europe. During the 1640s, his French counterpart was performing in Paris by a member of the Brioché lineage; meanwhile Pietro Gimonde, known as “signor Bologna”, introduced Pulcinella in Munich in 1656 and then in London in 1662. In Germany, puppeteers like Johann Peter Hilverding were called “Pulcinella Spieler”; in France, Polichinelle was born; in Great Britain, Punchinello gave rise to Punch; later on in Spain the term purchinelas came into use (see Don Cristóbal).

While commedia dell’arte was beginning to fade away by the end of the 18th century, the character was preserved thanks to the puppeteers. In Naples, he performed in public squares such as the Largo di Castello, and became the star of the San Carlino theatre between 1822 and 1876. In Rome, he appeared primarily as a glove puppet in Piazza Navona before relocating to the Pincio gardens; he also, however, was presented as a string puppet in private puppet theatres and at the Teatro Fiano in Rome, and even as a comic interlude within plays of chivalric tales based on the works of Ludovico Ariosto (1474-1533) and Matteo Maria Boiardo (1434/41-1494). The puppet repertoire nonetheless privileged love stories where Pulcinella often appeared in the role of the suitor or the unfortunate lover, condemned to death and then saved by Colombina whom he succeeded in marrying in the end. He could also become much more aggressive and vindictive, taking on the role of avenger or righter of wrongs in violent duels.

The most famous Neapolitan interpreter of the role in the 19th century was Michele Barone, who worked in the Molo neighbourhood. In the early 20th century, Antonio Zampella was a notable performer. His son Nunzio carried on the tradition until the 1980s; his repertoire was safeguarded by Bruno Leone, who directed some productions and wrote some texts for La Guaratella: burattini e burattinai a Napoli (Bologna, 1986).  In this way some scenarios were preserved, including La Mappata di panni (The Clothes Bundle), Il Cane (The Dog), Il Fidanzamento di Pulcinella (The Betrothal of Pulcinella), La Morte (Death), L’Arresto (The Arrest), La Confessione (The Confession), L’Impiccagione (The Hanging).

As these performances were increasingly directed toward an audience made up mostly of children, however, the character lost some part of its complexity. Today, he has become a nearly universal figure, but transformed within each country into a specific national character; Pulcinella is always performed in Italy.

The Istituto delle Guarattelle in Naples, under the direction of Bruno Leone, has revived the puppet with a regular theatrical season as well as a museum with a permanent exhibition, Pulcinella burattino del mondo. In Rome, in addition to Carlo Piantadosi at the Janiculum, the San Carlino theatre, founded in Turin in 1979 and taking up the name of the famous Neapolitan theatre, presents a repertoire of about thirty plays in its permanent theatre established in 2004 in the Pincio at the Villa Borghese. Elsewhere, other companies participate in safeguarding the tradition: for example, Arrivano Dal Mare!, under the direction of Luca Ronga of Bologna, who directed a notable and very well-received production of Pulcinella e l’organetto (Pulcinella and the Barrel Organ) in 2003.