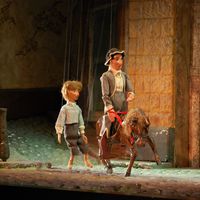 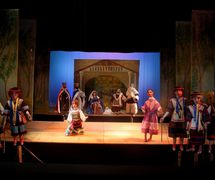 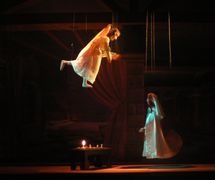 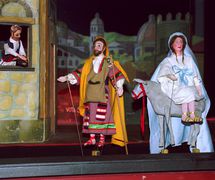 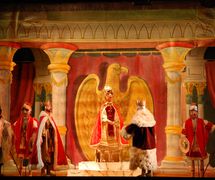 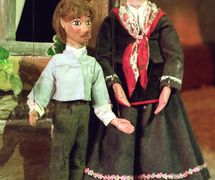 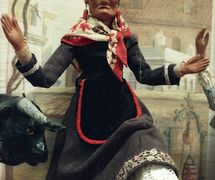 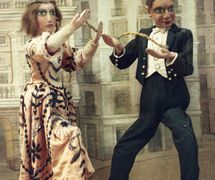 Spanish puppet theatre and character. In the middle of the 18th century, a growing regard for theatre and woodcarving encouraged the development of puppetry. In 1815, the artist Pedro Montenegro (1778-1857) opened a theatre on Calle Compañía in Cádiz, to present a play popularly known as Nacimiento de figuras de movimiento (Birth of Figures in Motion). His trademark performances, Isabel II and then Libertad, featured a character, Tía Norica (Aunt Norica), who gave the shows and the theatre their popular names. After the theatre was demolished in 1870, performances were held in other premises.

From 1901, the company was headed by Luis E. Chaves (1847-1919). He introduced electric lights and a portable theatre that could accommodate an audience of two hundred spectators. This theatre featured a retablo, a miniature Italian-style proscenium stage adapted for puppets.

Manuel M. Couto (Seville, 1880 – Cádiz, 1947) succeeded his father-in-law and perfected his manipulation techniques of both string puppets and rod puppets. His string puppets were supported by a small, vertical T-cross – whose centre supported the string of the head and the extremities of the arms, while the legs were independently controlled and animated from a bridge. Rod puppets were manipulated by the puppeteer while sitting in the small theatre’s orchestra pit. Couto toured different localities and introduced new themes into the repertoire.

In 1976, Carlos Aladro published the book, La Tía Norica de Cádiz, and in 1978, the Ministry of Culture acquired the puppet collection and moved it to the Museo de Cádiz (Cádiz Museum). Once restored, the collection was exhibited at the II Fiesta Internacional del Títere de Sevilla (Second International Puppet Festival) held in Seville in 1982. The exhibition was so successful that the city of Cádiz decided to revive the company in 1984 with reproductions of the original puppets. Pepe Bablé took charge in 1985 and, since then, the company continues to present performances from its repertoire by always mixing modernity with tradition.