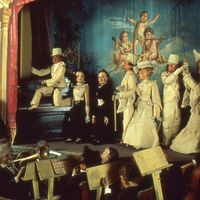 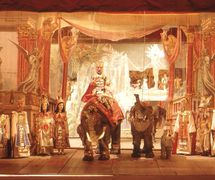 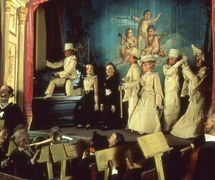 A family of Italian puppeteers (initially glove puppets, and later string puppets) established in 1818 in Turin, where the first of the line, Luigi (Ferrara, 1768-?), settled following the puppeteer (of string puppets) Jacoponi.

After gaining his independence, Luigi Lupi began his career on the outskirts of Turin, then in the San Martiniano theatre. First with Arlecchino (Harlequin) and then with Gianduja, the family stayed there until 1883. The writer Edmondo De Amicis, an eyewitness to this period, described the fervour of the audiences at the San Martiniano theatre and the richness of the production that stretched from the old frameworks of the commedia dell’arte to dances and historical events. “The theatre of the Lupi family reflected all the rebirth of our national life; Gianduja risked prison when there was no freedom of speech, defied the police, announced the revolution . . , glorified the martyrs, celebrated the victories…. avenged the illustrious victims of injustice at the hands of the governments and the people …”. De Amicis paints the portrait of a profession that tends to extremes in the richness of its mechanisms, its inventions, its stage machinery, and its props, which for two centuries made the Teatro Lupi a benchmark for audiences of adults as well as children, in Turin and the surrounding areas.

The Lupi dynasty continued with Enrico, son of the first Luigi, and after a succession of Luigis (all the way to a Luigi VII and a Franco Lupi VIII) passed from the San Martiniano theatre to the Angennes theatre in 1884, and after World War II to the Teatro Gianduja in Via Santa Teresa.

The very rich collection of backdrops (more than a thousand), scenarios, scenery materials and props, in addition to the splendid puppets themselves, made possible the foundation of a permanent museum of Piedmontese puppetry, one of great artistic and historic worth.