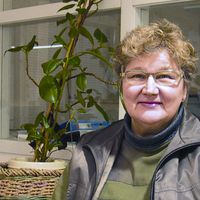 Finnish theatre manager and puppet theatre director. Mansi Stycz is the founder and, since 1979, the Artistic Director of Teatteri Mukamas (Theatre Mukamas) in Tampere, a professional puppet company with a repertoire widely acknowledged for its innovative combination of traditional and modern puppetry elements. Her education includes further training in puppetry at the Theatre Academy in 1983, a Bachelor of Arts degree in Drama, University of Tampere (1990), and a special degree in Speech and Drama from the Snellman-korkeakoulu (Snellman College), Helsinki, in 1995.

Mansi Stycz has directed more than fifty puppet plays both at home and abroad. She and her company have created long-lasting artistic connections with international theatres and artists in Sweden, France, Russia and the Czech Republic. Many of her sensitive, poetic plays for children have been small-scale table stage productions with one puppeteer. Highly energetic and grotesquely humorous productions include The Golden Fish (1999) and A Lesson: The World of Puppetry – the Puppetry of the World (2003), in which the latter introduces many techniques of puppet theatre. For adult audiences Mansi Stycz created three “collages”, productions combining poetry and music: Poetic Triptych I: Edith Södergran – To All the Four Winds (1995), The Eyes of the Soul – Musical Collage About Love (1996) and, in Russian, for Russian actors: Adagio – Vivaldi (2002).
Besides her artistic work in the theatre, Mansi Stycz has promoted Finnish puppetry through the following roles and contributions: as Vice-President (1983-1993) and President (1993-2004) of UNIMA Finland; as the principal organizer of the National Year of Puppetry in 1999; and as a member of The National Arts Council Puppetry Team, which developed the Puppet Theatre 2000 Report for the Ministry of Education. This report is one of the cornerstones contributing to the recognition of puppetry in the field of the dramatic arts in Finland. Her career includes long-term participation in International UNIMA as a councillor, Executive Committee member and chairperson of the Europe Commission. Mansi Stycz’s contributions have been officially recognized in Finland both at the regional and national levels: in 1997, she received the Häme Regional Arts Council Cultural Award and in 2003 the State Award for Children´s Culture.