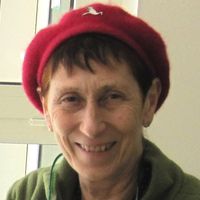 Meg Amsden set up Nutmeg Puppet Company in 1979, initially with writer Frances Kay, to perform summer shows on Southwold (Suffolk) beach, after an apprenticeship with puppeteer and artist Guy Richardson. Since then she has produced and toured 47 shows to a variety of venues and audiences indoors and out, including three productions for elderly people (Whose little Girl are You?, 1994, Butterfly Rover, 1998, and Knowlittle, 2007) and two productions for early years (Apple Pip, 2003, and Pip’s Wildlife Garden, 2010). Her shadow show based on Italo Calvino’s The Intangible Cities of Margherita Monticiano (2011) is currently touring to festivals and arts centres.

Amsden’s particular interests are the environment and shadow puppetry, and she has run workshops in countless educational and community settings for people of all abilities. From 1985 to 2006 her unique relationship with the Broads Authority who administer the Norfolk and Suffolk Broads (waterways of a National Park) involved producing and touring annual shows about the ecology and social history of the Broads, taking part in projects and conferences in the UK and Europe for European National and Nature Parks and Living Lakes, and developing and running the Ecopuppets project with the Danube Delta Biosphere Reserve, Romania, and the Broads (1995-1999).

She contributed to and was English language editor of The Power of the Puppet (2012), published by UNIMA’s EDT Commission and the Croatian Centre of UNIMA.