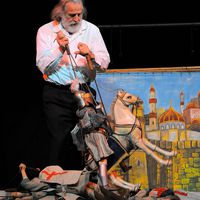 Italian puppeteer, puparo and cuntista. Son of Giacomo Cuticchio, a travelling puparo well known in artistic circles in Palermo, Mimmo Cuticchio is the most important figure in the preservation and renewal of the tradition of the opera dei pupi in Italy. He was brought up in the world of the “opra” and initiated at an early age into the manipulation of the large Sicilian puppets, the pupi. He took part in the Spoleto Festival of Two Worlds in 1963. In 1967, he accompanied his father to present a show at the Italian Embassy in Paris. He decided to remain there for a few months and opened a little pupi theatre on the Boulevard Saint-Michel.

Back in Rome and then in Palermo in 1970, he wished to free himself from the authority of his father and to break with a tradition that had become fossilized into a form of folklore designed for tourists. Mimmo Cuticchio turned to Peppino Celano, another puparo and one of the last masters of the cunto, a Sicilian form of story-telling performed in the street that narrated the epic of the paladins of France, employing only a sword, the body and the voice. With the death of Celano in 1973, Cuticchio opened his Saint Rosalia pupi theatre in Palermo and wrote his first script, Giuseppe Balsamo count of Cagliostro, soon to be followed by the Passion of Christ and Geneviève de Brabant. From then on he devoted himself to re-creating the art of the pupi by broadening his traditional repertoire and taking contemporary reality into account (Guided visit to the opera dei pupi, 1989).

In 1977, he founded the association “Figli d’Arte Cuticchio”, which incorporated the existing company and became the first company of pupari to establish an ongoing relationship with the administrative authorities. This unit of production under his own direction allows him to be in charge of the total creation of a piece of theatre from the carving of the wood, the artisanal construction of the puppets, their armour and costumes, and the painting of the scenery to the final production of the show. In addition to the classic works of the pupi theatre, the most important pieces of the company are Francesco e il Sultano (St Francis of Assisi and the Sultan), Le meravigliose avventure di Guerino Meschino (The Wonderful Adventures of Guerino the Wretched), a script based on a text by Andrea da Barberino (14th-15th century), L’Iliade ossia il Riscatto di Priam (The Iliad or the Ransoming of Priam) and L’Urlo del mostro (The Howl of the Monster, “a journey through Homeric poems”).

Mimmo Cuticchio is also very interested in the operatic repertoire, with productions of Il combattimento di Tancredi et Clorinda (1990), Tosca (1998); Manon (1999); La terribile e spaventosa storia del principe di Venosa e della bella Maria (The Terrible and Appalling History of the Prince of Venosa and the Beautiful Maria, based on the life of the composer Gesualdo and set to music by Salvatore Sciarrino, 1999); Macbeth (2001) and Don Giovanni (2001-2002; see Don Juan). The Figli d’Arte company initiated the Macchina dei Sogni (dream machine) festival in 1984 and has toured widely in Italy and abroad, notably in Europe and Asia.