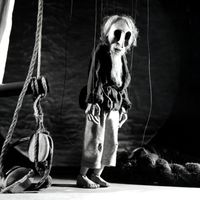 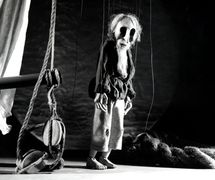 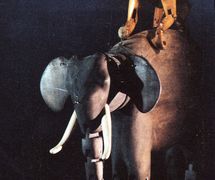 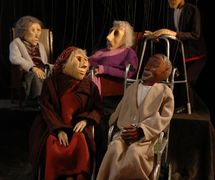 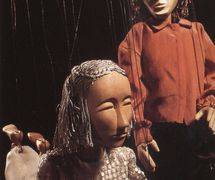 British puppet company founded in 1978 by Grenville and Juliet Middleton (née Rogers). The company owns and runs the Puppet Theatre Barge (opened in 1982), a fifty-seat marionette theatre on a Thames barge, which is moored at Little Venice in central London. During the summer months the barge is moored at Richmond-on-Thames.

Movingstage Marionettes specializes in productions for all ages using carved wooden string puppets (marionettes), with scripts taken from classic writers such as Samuel Taylor Coleridge, William Shakespeare and Federico García Lorca; or from collaborations with contemporary playwrights and poets. They frequently draw on animal folk tales for their children’s repertoire. Their technique is based on the interplay of recorded music and dialogue spoken by actors, with the string marionette at the centre of most productions. Powerful lighting effects also feature strongly in the performances.

The company also works in schools and has given practical training to many young puppeteers. Movingstage has toured a number of shows internationally. Productions include Sir Gawain and the Green Knight (1979); Bottom’s Dream (after Shakespeare, 1980); The Ancient Mariner (1982) by Samuel Coleridge; The Butterfly’s Spell (1985) by Federico García Lorca; The Flight of Babuscha Baboon (1988) by Harry Marshall; The River Girl (1989) by the poet Wendy Cope; A Shipful of Verse (1992); two plays by Howard Barker, All He Fears (1993) and The Swing at Night (2001); Millennium Mischief (2000) and Joey’s Circus (2006) by Glyn Edwards; Out of the Heart of Darkness (2005) adapted by Gren Middleton from Joseph Conrad; Footprints in the Wilderness (2008) and The Money Game (2011) by Gren Middleton. The company received the Harlequin Award for Marionette Presentation in 2000.