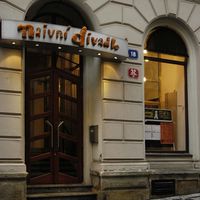 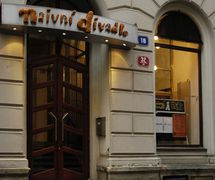 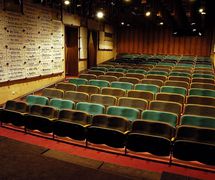 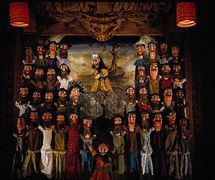 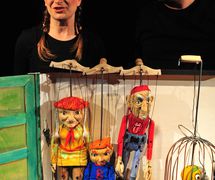 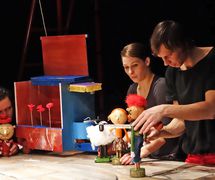 Czech puppet theatre, founded 1949 in Liberec. Naivní divadlo Liberec emerged when the local amateur stage became professional. Under the leadership of director Jiří Filipi, Naivní divadlo gradually moved away from a descriptive, “illusionary” style of production to one that was open to the full scope of puppetry. Thus, the production that became the theatre’s benchmark was Tajemství zlatého klíčku (The Secret of a Little Golden Key, 1958), written by Elena Borisovová, which was awarded at the Bucharest International Festival.

By the early 1960s, the new style was fully in evidence in the theatre’s productions for young audiences, where poetic stylization was inspired by the playfulness and the “naïve” vision of the world of children, which probably inspired the company’s name. This artistic trend was especially influenced by director Jan Schmid (founder of the Studio Y, which was a part of Naivní divadlo from 1968 to 1978) and the puppeteer and author Karel Novák, who laid the foundations for a programme of performances shown in kindergartens and similar environments where improvisation and children’s participation was encouraged.

In the 1970s, director Oldřich Augusta emphasized the moral and emotional education of children, but in a non-didactic manner. Meanwhile, the theatre’s repertoire included performances for adults, such as Smrt Tintigalova (The Death of Tintagiles, 1969) by Maurice Maeterlinck, and Karel Hynek Mácha’s Máj (May, 1976). In the 1980s, under the direction of Markéta Schartová, with O věrném milování Aucassina a Nicoletty (About the Faithful Love of Aucassin and Nicolette, 1981) and Turandot ukrutnice (Turandot the Cruel, 1982), the company had earned considerable success due to its synthetic concept of staging that mixed puppets and actors. In addition, set designer Pavel Kalfus played a very important role with his innovative stage and set designs, together with director Pavel Polák and playwright Iva Peřinová who collaborated on notable performances such as Branka zamčená na knoflík (Gate Locked by a Button) and Turandot ukrutnice (Turandot the Cruel).

Since 1991, Stanislav Doubrava has been the artistic director of the theatre, with a guest-stage director, Tomáš Dvořák. Inspired by the comic traditions of folk puppet theatre, productions such as Bezhlavý rytíř (The Headless Knight, 1993) have played an important role in the artistic profile of the company. The most important productions of the past two decades are Alibaba a čtyřicet loupežníků (Ali Baba and the Forty Thieves, 1994), Kytice (Bouquet, 1998), Bouře (based on The Tempest by William Shakespeare, 2002), and Tristan a Isolda (Tristan and Iseult, 2004).