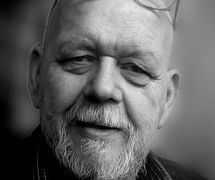 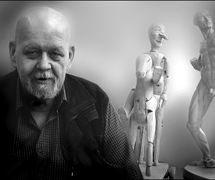 Czech stage and set designer, puppet designer, painter, and teacher. Pavel Kalfus graduated in 1965 from the Puppetry Department of the Academy of Performing Arts – Divadelní fakulta Akademie múzických umění or DAMU – in Prague. He worked as a visual artist at Loutkové Divadlo DRAK (DRAK Puppet Theatre) in Hradec Králové from 1965 to 1974 where he contributed to the success of the company directed by Miroslav Vildman and Josef Krofta, notably with Petruška (Petrushka) in 1973. In 1974, Pavel Kalfus joined Naivní divadlo Liberec (Naïve Theatre of Liberec) where he created the stage design and puppets for Kytice (Bouquet, 1973) by Karel Jaromír Erben, and Máj (May, 1977) by Karel Hynek Mácha and directed by Krofta, as well as Poslechněte, jak bývalo (Listen How it Used to Be, 1975), directed by Markéta Schartová.

Pavel Kalfus’ creations are intended mainly for pre-school children. Since his first production, Červená Karkulka (Little Red Riding Hood, 1964), he has worked with director Pavel Polák and had great success with works such as Motanice (Hodge Podge, 1975), Šla barvička na procházku (Little Colour Goes for a Walk, 1978), and Potkal klauna, potkal kloun (He Met a Clown, The Clown Met Him, 1981). He has also worked on productions for teenagers and adults such as Turandot ukrutnice (Turandot the Cruel, 1982) and Kavkazský křídový kruh (The Caucasian Chalk Circle, 1987) by Bertolt Brecht. His staging of productions such as Brum, dům, Ťululum (1984) were equally well received by critics and audiences.

Since 1988, Pavel Kalfus has been head of the Department of Stage Design (Scenography) at the Department of Puppetry of the Academy of Performing Arts (DAMU). With a very creative team and Tomáš Dvořák, he has worked on the designing of Jeminkote, Psohlavci! (My God, Here Come the Czech Border Guards!, 1989) at Divadlo dětí Alfa (Alfa Theatre for Children) in Plzeň (Pilsen), and on Voda čerstvosti (Refreshing Water, 2000) at the Divadlo Minor (Minor Theatre; former Central Puppet Theatre of Prague). Recently, he has worked with the Divadlo Lampion (Lantern Theatre) of Kladno and the Malé divadlo (Little Theatre) of České Budějovice. Since 1995, Pavel Kalfus has produced posters and other accompanying documents for the annual Mateřinka festival held in Liberec.

Today, Pavel Kalfus is considered one of the outstanding stage designers of contemporary Czech puppet theatre.