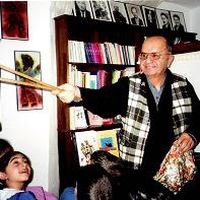 Turkish shadow theatre puppeteer. An engineer who is talented in music, Orhan Kurt plays saz (a Turkish tanbur or lute) and has a fine singing voice. In 1957, he became the apprentice of karagöz master Ragıp Tuğtekin, and worked with him from 1957 to 1979, learning the art of karagöz and creating Karagöz ve Kukla Tiyatrosu (Theatre of Karagöz and Puppets) with his assistants Hayret and Selçuk Kurt.

Orhan Kurt has performed karagöz shadow play in Germany, France, Italy, Greece, and Romania. His shadow figures have been exhibited in many museums in Germany, Japan, France and England. He has also taught music in cultural courses and received many awards for his contribution to Turkish Culture including an outstanding service medal for fifty years of devotion to karagöz awarded by UNIMA Turkey in 2008. He is the second chairman of UNIMA Turkey. He continues to make puppets and perform karagöz shadow plays at his workshop. In 2010, Kurt was awarded as one of the seven Turkish Living Treasures by UNESCO and the Turkish Ministry of Culture and Tourism.