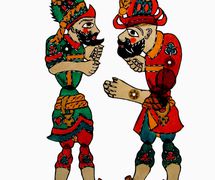 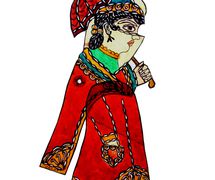 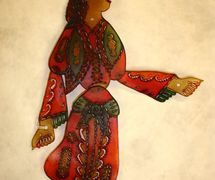 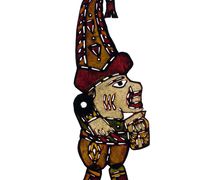 The Turkish shadow theatre gets its name from its primary hero, Karagöz (“Black Eye” in Turkish) and a Persian origin has been suggested by some (see Iran). His predicaments remind us of Punch in England, Hanswurst[lier] in Germany, [lier]Kasperl in Austria, and Polichinelle and Guignol in France. The burlesque performance, seemingly harmless, defies constraint in a spirit of satire, and has enchanted the public, especially the Ottoman middle class, for hundreds of years.

A Theatre of Shadows

“At the inn in a large room, opening on the little platform of the entrance, stuffed, for the evenings’ performances, with all the young crowd of the quarter, packed in to see the simple guignol, yet also the authentic, old-style Karaguez karagöz, illuminated by the lamp shining behind the white cloth screen on which float the coloured shadows of the popular puppet show. A rare curiosity, to see the parade of the men on the street of this local anthill, through these slight plays of a thousand-year-old repertory” (André Antoine).

A performance of the Ottoman cities, karagöz was shown in the popular cafés, especially during the month of Ramadan, sometimes in the open air. And in private homes for celebration of a circumcision or of a winter evening. At the palace and in the homes of dignitaries, this art produced performers who excelled with their verve for satire, Persian and Arabic literary knowledge, as well as their understanding of philosophy and music. These were such performers as Hasanzade Mehmet Çelebi, much appreciated by Sultan Murat IV (1623-1640); Rıza Efendi, the performer for Sultan Abdülaziz (1861-1876); or Hayali Mehmed, who played for Sultan Abdülhamid II (1876-1909).

The flat figures traditionally are made by the showman from hide – camel, water buffalo, cow or calf – which is translucent from the washing, scraping, and polishing. The outlines and the details of the design are cut and incised on a table of lime wood with a dozen types of sharp steel blades (nevrekân). Using Chinese ink the lines and details of the costume are traced and painted with vegetable dyes in lively, translucent colours, which each maker keeps secret. The figures are attached to each other by a string of gut. They are, during their role on stage, articulated at the neck, the waist or legs, and, for some, at the arms – as in the case of female dancers and Karagöz, the eponymous hero. Their size ranges from 24 to 40 centimetres, and depends on their use, their importance, or their strength. Decorative elements and animals range from 7 to 45 centimetres. Formerly, according to the size of the performance space, there were three sizes of figures.

The screen is of thin white cloth measuring about 1 or 1.10 metres by 60 to 80 centimetres. It is lit from behind by an electric bulb (in the past by a candle or flame), which casts the shadows as the coloured silhouettes which the performer dances.

The Manipulator and the Troupe

The puppet master (karagözcü) operates the figures with the aid of wooden rods 50 to 60 centimetres in length, affixed at the attachment point, generally on the figure’s shoulder, but sometimes the arms. The manipulation is horizontal. Virtuosity is seen in the number of figures that can be moved at the same time until that alone can provide the spectacle. The performer must be very clever, a good actor, have a strong memory, a good voice and possess a level of culture, and musical ability. The apprentice (çırak) adds sound effects, plays the flute, drum (düdük) and tambourine (def) to mark the entrance of each character, which he holds for the performer and then reprises when the figure is leaving the scene. After debuting and once one has acquired sufficient expertise, if it is merited the performer is given title of Master (Hayali, “one who animates the shadow play”, “image creator”). Generally, the puppeteer is very involved in the shadow theatre. He makes and manipulates and masters the total traditional repertory.

Formerly, a troupe was composed of the following six: the puppet master (karagözcü,hayali, usta), his apprentice (çırak), a secondary apprentice (sandıkkâr, lit. “the one who takes care of the trunk”), the porter or carrier (hamal), the singer (yardak), the tambourine player (dayrezen) who provides the sound effect for the hits. An ensemble (çalgı) plays before the performance and during the interludes, and accompanies the songs and dances with a large drum (davul), oboe-like reed instrument (zurna), a shepherd’s flute (kaval), zither (kanun), large and small bowed lute (keman and kemançe), a goblet drum (darbuka), stick drum (nakkare), cymbals (zil), shaken instrument with small bells on the end (zillimaşa), bagpipe (tulum), long-necked lute (saz or baylama), short-necked lute (ud), and gourd fiddle (kaba). Instruments are replaced in the current period with a sound system, disk player, and CDs. A bell chimes, the decoration displayed on the screen vanishes, the sound sharpens and buzzes, the wooden reed whistle (nareke) sounds… the play begins.

Order of the Performance and the Characters

The discrete parts of the karagöz play can be classified as follows:

Hacivat comes on to a popular tune (semai) with precise musical rhythms, and then recites a philosophical-mystical poem (perde gazeli), emphasizing the profound meaning of the shadow. Then, he calls loudly to his accomplice Karagöz who makes a parody of the “ode to the screen”.

The two protagonists engage in comic repartee, a kind of spirited one-ups-man-ship, rich with proverbs, rhythmic formulas, and cadence (tekerleme). The puppeteer largely draws on popular stories to enrich the repertory of these “introductory dialogues” demanded by their tradition. While the puppeteer cannot go out of this structure and frame of the play, he improvises within this standard dialogue, according to his fantasy and imagination and the reality of the moment, in tune with the audience reactions. However, if certain dialogues and scene structures never vary, the content can be embellished through varied and unexpected improvisations or on the contrary dealt with very briefly. Sometimes the duo scene is followed by another dialogue (ara muhaveresi) lampooning or allowing the appearance of another character with whom Hacivat chats, as Karagöz continually interrupts or tosses in asides.

The play becomes the title of the performance. The plot, which is often thin, is presented, and all of the various characters play their roles. The play will end with giving the moral to the spectators and one or more dances.

The two heroes chat and jostle, before announcing, if there is one, the next performance.

They represent the different types that were found in the neighbourhoods of Istanbul before 1900. The capital was a true microcosm of the social life of the Ottoman Empire, setting the individual life in this structure, with its organization and collective consciousness. In addition to the Turks, the different ethnicities and foreign minorities of the neighbourhoods paraded, reflecting the heterogeneous population of the empire. Each character synthesizes a type and through this the identity of their place. Each character bore his/her manner of behaviour, identity and place of origin: nationality, accent, dialect, music/song, trade, traits of a precise character, physical and moral flaws are accentuated, along with manias or ticks. These were so well known among the people that they became almost legendary.

Two characters are inseparable and unceasing with their quarrels and reconciliations. The comedy comes from their contrasting characters, in culture and language. One is the flowery, educated Ottoman. The wise words, metaphors, proverbs, and formal learning of Hacivat represent the opportunist, the petit bourgeois person or the learned man of the town. He is falsely erudite, mannered, and calculated. In opposition, Karagöz is accused of all sorts of faults. He is hypocritical, gross, immoral, lazy, and ignorant, but is full of cunning and common sense of the common man. The dialogue (with Hacivat) is a series of mistaking one thing for another and misunderstandings: it is full of rough metaphors, neologisms, exaggerations, puns, linguistic somersaults, vulgar pleasantries, and double meaning. His speech is non-stop impertinences, insults, jibes, and scandalous proposals.

Around Karagöz and Hacivat revolve a line up of extreme comic stereotypes.

Çelebi, a young man about the town, dandy, daddy’s boy, flighty husband, lady killer, unfaithful husband, or old beau. He walks around with a flyswatter and cane, badges of his idleness; he has a tulip in his hand, and gets by on his smooth manners and affected diction.
Tiryaki, an opium eater who carries his pipe and fan. He passes his time puffing on opium in the café.
Bebe Ruhi, the hunchback dwarf with his top hat, altı kulaç (“six fathoms”). He can do feats of strength despite his small size and stupidity.
Tuzsuz deli Bekir (or Matiz), a drunkard, bully, and buffoonish fighter. He represents authority with a dagger in one hand and a jug of wine in the other.
Zenne, a woman of questionable morals, who stands up to all the neighbours without a blush.
Külhanbeyi, the “arsonist”, the kind of rogue with a rolling gait that is punished by the police by being sent back to clear the ashes from the hammam (steam bath) he burnt down.

Among the ethnic types from the provinces of Anatolia are represented by Efe or Zeybek from Aydın (near Izmir); by Baba Himmet the woodcutter of Kastamonu, known for his imposing size – this is the largest figure – who is nicknamed “Galata Tower” and is a typical example of someone who comes to work in the capital then returns rich to his home village and waiting bride; and other ethnic types from the provinces such as the boatman of the Black Sea, the cook of Bolu, the baker of Safranbolu, the merchant of Kayseri, the porter of Harput, etc.

The parade of all the “ethnic” types of the Ottoman Empire include: the Roumeliote (Rumeli) and the immigrant from the Balkans (Muhacir), wrestler or coachman/driver; from Albania (Arnavut), itinerant tradesman/street vendor, gardener, rural policeman or horse dealer; the Tartar (Tatar) with his boots, vest bordered with fur, and chapka hat; the Arab with the title of Hacı because he has made the pilgrimage to Mecca; the Black (Arap), caricature of a eunuch, a faithful servant; the Persian (Acem), in actual fact a Turk of Azerbaijan, nicknamed “Rose of Iran”; the Armenian (Ermeni), known for his fine voice and talent as a musician; the Jew (Yahudi), a junk dealer, goldsmith and money lender, portrayed as stubborn and a haggler; the Greek (Rum), often a physician, tavern keeper or merchant who introduces Greek words into his speech; the European (Frenk), called “Freshwater Frenchman” because he takes the tours of the Fresh Waters of Asia (in fact, a composite of the Greek and the Levantine character).

All these characters, socially and psychologically well-defined, are heralded by a song or tune of their region, and they turn up according to the needs of the play, and with them a string of other characters in minor roles: imam, rabbi, night watchman, troubadour, storyteller, dancer, acrobat, clown, stutterer, deaf man, legless cripple, madman, neighbours, street vendors, musicians, good and bad genii, fantastic beings, mythological creatures …and women: girls, stepmothers and mothers-in-law, dancers, gypsies, courtesans, elegant bourgeois ladies, gossips, shrews, witches, go-betweens,  and servants.

The sets are of great delicacy and some, such as the mountain (comprised of fourteen pieces), are complex, for example, the garden of the seraglio, the three-decked boat, the shelves of the grocer’s or coffee merchant’s shops, the steam room at the Turkish bath, or the pharmacy of the druggist. All show great design sense. Small props of everyday life are accurately represented, for example the bride’s trousseau in Büyük Evlenme (The Big Wedding).

This shadow world expresses the glory of the Ottoman Empire, and those who preserve it to the present remind Turks and the world of who they were and show how wit and humour can re-illuminate the contemporary world through these phantoms of the shadow screen.