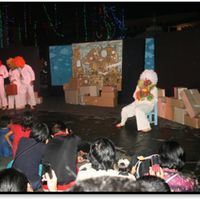 Indonesian avant-garde puppet company of Java. Inspired by the Jakarta International Puppetry Festival of 2006, illustrator and writer Maria (Ria) Tri Sulistyani and her partner Iwan Effendi combine their visual arts background and storytelling talents to make installation pieces and puppet performances for adults and children. They began doing workshops for children’s groups in 2006. But by 2008 they were using figures to delve into issues of sex and politics. They have collaborated with puppeteers from around the world, performed in the United States, Korea, Vietnam, India, and, in 2009, Ria received a grant from the Asian Cultural Council to explore puppetry in the United States.

Papermoon’s most ambitious programme to date is Mwathirika (Victim), which created controversy when it shared stories of the 1965 mass murders in Java of those accused of being communists. Using kuruma ningyō (Japanese cart puppet) and old newsreels, the imprisonment, despair and shattered families of the 1960s were evoked by the nine-person troupe.