Cotsen Center for Puppetry and the Arts 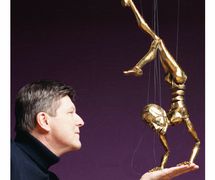 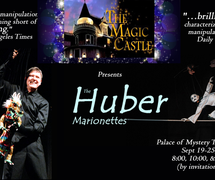 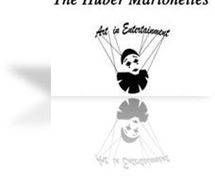 American puppeteer. Phillip Huber’s interest in puppets started at an early age as he was growing up in Illinois. He majored in Theatre and Education at Principia College. After graduation, he worked for Tony Urbano and Jim Henson. In 1980, he joined forces with partner David Alexander to begin the Huber Marionettes.

Phillip Huber has international cabaret credits that include playing the Lido in Paris, Casino de Monte Carlo, the Cunard, Crystal and Seabourne Cruise lines, and The Tonight Show. His variety show puppets are beautifully crafted and glamorously costumed. His manipulation is exceptional. He was featured in the Tommy Tune musical, Busker Alley (1995), which showcased his marionette dog, Taffy. Phillip provided the marionette (string puppet) manipulation for the film Being John Malkovich (1999). His honours include the Puppeteers of America President’s Award, an UNIMA-USA Citation of Excellence, and a Royal Command Performance in Monte Carlo, Monaco. His show, Suspended Animation, as been performed in Japan, South Korea, Brazil, Ireland, France, Spain, Portugal, Switzerland, Norway, Mexico, and Canada. He created the puppets for the rock opera Don’t Trust Anyone Over Thirty (2006) by Dan Graham and Tony Ousler, which toured Europe.

Phillip Huber is currently working on puppets for the film, Oz the Great and Powerful, scheduled for 2013 release. He has taught puppetry at the National Puppetry Conference at the Eugene O’Neill Theater Center (Waterford, Connecticut) and at the Cotsen Center for Puppetry and the Arts at the California Institute of the Arts (CalArts, Valencia, California). Emerging puppet artists in the United States have frequently acknowledged Phillip Huber as an influential mentor.