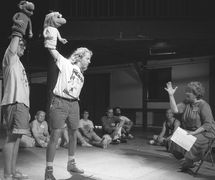 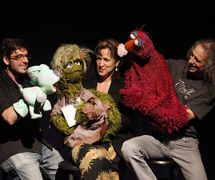 American training conference on puppetry hosted by the Eugene O’Neill Theater Center in Waterford, Connecticut, United States. The O’Neill Theater Center was founded in 1964 by George C. White with the aid of Rufus and Margo Rose. The National Puppetry Conference was established in 1990 and is supported by the Rose Endowment for Puppetry, created by Jane Henson. The founding members of the Conference were Jane Henson, George Latshaw, Richard Termine, Bart P. Roccoberton Jr., Bobbie Nidzgorski, and Jim and Margo Rose. In 2002, Pam Arciero was named its artistic director.

The purpose of the National Puppetry Conference is to encourage artists to create and communicate through the visual and kinetic form of the puppet, to push beyond their personal boundaries and develop new works for puppet theatre. Participants collaborate with renowned guest directors, puppet artists and playwrights to develop innovative productions conceived by guest artists, as well as presentations initiated by the Conference participants.

For eight days in June at the Eugene O’Neill Theater Center, participants explore styles and hone skills in a nurturing, non-judgmental atmosphere. Special segments of the Conference are devoted to marionettes (string puppets), writing, video, directing and music. The Conference concludes with two performances developed during the week.